The thought of summing up this year is so daunting that I considered skipping it altogether. In addition to keeping Mazzy alive to the age of two(!), maintaining what I think is a healthy marriage and holding on to my day job, somehow I have continued to write Mommy Shorts daily, launched a second site and started a YouTube show. My husband would say this is the reason I have been sick for the past month and show no signs of improving. He's probably right. But I love this site and everybody that reads it and can't imagine slowing down.

I would, however, like to go the easy route on writing my year-end wrap-up. Bed is calling and I'm still pretending to be on somewhat of a vacation.

My first thought was just to list the ten most popular posts BUT HORROR OF HORRORS— almost none of those posts involve Mazzy.

2. Intruder in the House

4. Inappropriate Elf: One More Christmas Tradition That Makes Me Sad To Be Jewish

7. I Don't Know How She Does It Either

8. Twenty Reasons to Have Twenty Kids

It's an interesting thing for a "mommy blogger" when your traffic comes mainly from posts that have nothing to do with your family. In order to keep writing, I have to believe that my regulars care about my personal stories. And since only my most devoted fans will be reading my blog on the Friday before New Year's Eve, I decided to do an additional list that includes only posts about myself, my daughter and my lovable pill of a husband, Mike.

3. I finally get around to telling the story of The Day Mazzy Was Born.

5. Mazzy's blankie goes into cardiac arrest in The Importance of Boo.

6. I weigh the joy of Mazzy's first dip in the ocean with the annoyance of carrying 1000 lbs. of gear on scorching hot sand in Is the Beach Worth It?

7. Mazzy yells "BEAR!!!" in a crowded theater in You Can't Beat The Heat With Pooh.

8. I teach the seven stages of language development (including "The Broken Robot" and "The Snuffaluffagus Conundrum") in My Baby's Talking with No Help from Bruce Willis, Thank You Very Much.

9. Grammy outspells me in I am No Supermom.

10. Mazzy goes to her first day of pre-preschool in Even Future Presidents Eat Play-Doh.

Thank you to everyone who cares, who reads, who comments, who submits pictures, who enters my contests, etc. Without you all, I would have given up on Mommy Shorts long ago.

Honestly, one of the things I love most about my site is YOUR KIDS. If you pay attention, you'll find that that the same kids show up over and over again in the contests and fan photo albums.

One such kid is Lucie, the Evil Baby Glare-Off Champion, who recently sent in this picture: How awesome is that? I wish I could be there the day Lucie's mother sits her down to explain that poster. Also, doesn't Lucie look considerably less possessed-by-Satan as she gets older? Good thing because I imagine the devil is scarier once she's mobile.

Not to be outdone, here's the Evil Baby Glare-Off runner-up, Chelsea: Chelsea still looks like she has something up her sleeve, but maybe that's just me.

I hope everyone has a lovely New Year's. If you have a newborn and will be spending the evening at home, you might try my "New Year's Eve Newborn Parent Drinking Game" from last year.

If you are going out for New Year's Eve for the first time in two years like myself (we have an overnight wedding and Grammy is babysitting— WOOHOO!!!), have fun!

I hope to see you back here next year. Is it Just Me or Is Every Father’s Day Gift Guide the Same? 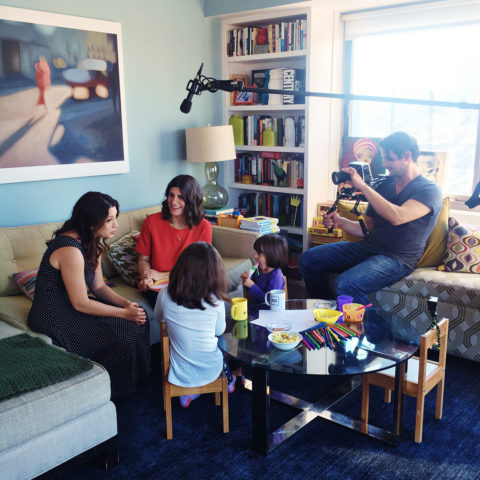