Ringing in the New Year at Home New Year’s Eve at the Wiles abode was a very humble affair. It consisted of one other family sleeping over at our summer house for a long weekend. There were a few party hats, some noise blowers, more bottles of champagne than four adults can usually consume in one evening, along with a surf and turf dinner (prepared by Mike) and Cards Against Humanity leading up until midnight. 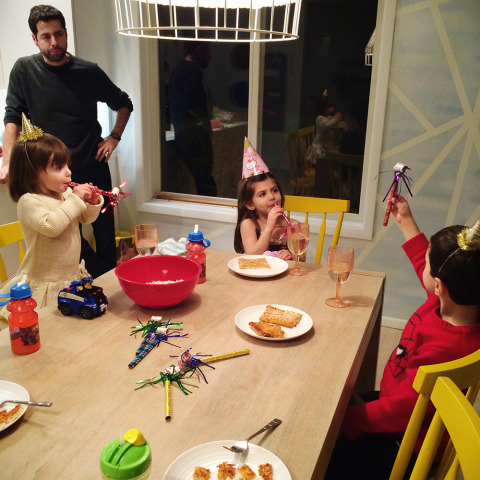 My friend Emily, who is my fancy fashion designer friend, brought a bunch of sequined dresses for us to try on and take what she called a “couch jumping” shot.

“Are 40-year-old women allowed to jump on the couch in sequined dresses?” I asked.

Twenty-five pictures later, we had one photo neither one of us was embarrassed to post on our various social media accounts. There’s also a slo-mo iPhone video taken by her husband that I would rather die than watch again.

During the couch jumping, Mazzy and her friend Charlie were in the other room watching Alvin and the Chipmunks 3 (“Chipwrecked” if you must know the full movie details). When I walked in, in my fully sequined attire, Mazzy’s eyes lit up like she was seeing me for the first time.

And that my friends, might be what makes me wear sequins at least once a week all year. Nothing like an ego boost from your five-year-old.

We had three separate New Year’s countdowns (two fake, one real) before we all went to bed. One for the little ones at 7:30pm… One for the older kids at 10pm… And one for the grown-ups at midnight. I’ve got no pictures because a) it was dark b) who cares about pics of the grown-ups and c) selfies tend to ruin a new year’s smooch with your hubby.

It was a low key New Year’s Eve, but also a wonderful one. It’s one of the first years I didn’t question what everyone else was doing or wonder if I was somehow missing out. I discovered you can spend it in your own home with your kids and it can still be pretty fabulous.

Not to mention, everyone can drink a lot more champagne when nobody has to drive anywhere and you’ve all agreed the kids can watch all the TV they want the next morning.

I also discovered the very best house guests come equipped with both alcohol for the evening and a restaurant-grade waffle iron for the morning after. Every new year should start with a stack of waffles.

Glad to see you all back here in the new year!

Even Parenthood is a Competition This Is What My Bedroom Is Supposed to Look Like 3 Moms Discuss How Their Families were Affected by Childhood Cancer

16 responses to “Ringing in the New Year at Home”