One of the things I love about having a two-year-old is listening to all the funny stuff that comes out of her mouth. Whether she’s telling jokes that make no sense or mispronouncing words (Snoopy is Snoofy, which is the cutest thing ever) or trying to engage me in the beginnings of an actual conversation, it is all adorable.

But the best is when Harlow totally wows me with a zinger or an insightful response or an extra big word that makes me realize she is way smarter than her size would have you believe.

Here are 13 examples of smart stuff Harlow has said or done recently that suggest she is way wiser than her years. A few weeks ago, we were swimming in the pool when Harlow’s big sister asked me a very important question.

I didn’t have to answer because Harlow immediately weighed in.

Mazzy: How do you know?

Harlow: Because I’m a mermaid!

2. Harlow is a master of small talk. We had a few new friends over the other day. Most of the kids were swimming in the pool but Harlow chose to sit with the adults who were chatting poolside. She screamed “STOP TALKING!!!!” because she hates when the conversation doesn’t revolve around her.

Me: The adults are allowed to talk to each other, Harlow.

Harlow: Talk to ME.

Me: Ok. What would you like to talk about?

And then all the adults (+ Harlow) spent the next twenty minutes talking about their favorite kinds of cookies, their favorite cars and what they would be having for dinner, which made for way better conversation than whatever nonsense we were talking about previously.

4. Harlow has good reasons for being scared of the dark.

ME: I know. It’s getting late.

HARLOW: I’m scared of the dark!

ME: What are you afraid of?

Not exactly the answer I was expecting. Here are Harlow’s exact words after listening to Taylor Swift’s “Style” while riding in the car: “If you are out of style, then your hair won’t look pretty. You don’t want to be out of the style.”

6. Harlow knows the importance of her own name. I took Harlow to a carnival and she got to go on real rides for the first time. No fear whatsoever. On the ride above, Harlow had her heart set on the pink car so she climbed in even though another girl was already sitting there. Then as the ride was going in circles, I watched her chat this older girl up the whole time.

“What did you talk about?” I asked Harlow when it was over.

ME: What was her name?

HARLOW: I don’t know. I told her I was Harlow.

7. Harlow understands the difference between a good sandwich and a bad sandwich. ME: You haven’t eaten any of your sandwich.

Fyi, I have no idea where she learned this. She just busted it out during dinner one day.

9. Harlow has an excellent memory.

Whenever I tell Harlow she can’t do something (like this morning it was cut an apple with a cleaver), she asks “Can I do it when I’m bigger?” I say yes and then she runs through a whole list of things she has built based on previous conversations, so I know she is keeping track. So far the list is, “When I get bigger I can jump in the deep end, I can paint my nails, I can chew gum, I can wear lipstick and I can cut an apple with a knife.”

Not only does she have an excellent memory, she has big (yet attainable) goals.

10. Harlow knows how to use our words against us. Speaking of getting bigger, Mike and I have used that to try and convince Harlow to eat more, since she is a notoriously picky eater. So now, when we tell her she is not getting dessert, she breaks down on the floor and cries, “BUT I WANT TO GET BIGGER!”

11. Harlow makes up her own words and they are better than the originals.

I handed Harlow a handful of cherry tomatoes and said, “Here are some tomatoes.”

HARLOW: No, Mom, there are four matoes!

I looked. There were indeed “four ‘matoes”. Whether she was purposefully making a joke or not, I have no idea. She wins either way.

12. Harlow knows how to use pronouns.

Harlow was facetiming with Grammy and showed her a My Little Pony doll.

GRAMMY: Oh, is that My Little Pony?

HARLOW: NO! it’s MY little pony.

GRAMMY: Right. That’s what I said. It’s My Little Pony.

13. Harlow does a spot on imitation of her mom. Harlow always asks me to play “baby” and “mommy”. Usually I’m the mommy and she’s the baby which is oddly similar to how we act together anyway. The other day, Harlow switched roles and said she was the mommy and I should be the baby.

HARLOW: Put your phone down or else I will take away TV. Now go to sleep. I said close your eyes. Now… WHERE ARE MY SUNGLASSES????

Today, I’m launching a search for the Smartest Cookie for the chance to win a $250 Target gift card and a selection of products from Bitsy’s Brainfood! Bitsy’s Brainfood doesn’t hide the fact that there are vegetables in their cookies— they want kids to embrace their veggies and know they’re good for them. The cookies are in the shape of the alphabet because— DUH. What is smarter than learning to spell while you eat your sweets? In addition to the regular bag, they also come in a pack of 16 single serve bags perfect for a healthy nut-free Halloween alternative.

I’ll post my favorites and announce the winner on September 24th date! 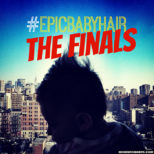 It’s Time to Cancel Everything