This Week’s Winners and Losers As I said, last week, Mazzy's sleep is still a work in progress. However, I want to be clear that even through the stumbles, we have still had tremendous success with Erin's plan.

We are still putting Mazzy to bed earlier which, oddly enough, means she doesn't put up a fight and falls asleep within a few minutes as opposed to singing and talking to herself for hours in bed. Also, because she gets more hours of sleep, Mazzy no longer wakes up crying in the morning.

Those were two of our biggest goals.

Mike and I talked to Erin tonight to go over the next steps of our plan. One reason Mike was on the phone was because I realized we are making a lot of changes and all parties needed to be completely on board or else none of this is going to stick.

We have one big new goal…

Ever since we switched Mazzy to a toddler bed, she has been coming into our room between 5:30-6:30am to wake us up. The new plan is to get her to stay in her room quietly playing by herself until Mike or I come to get her at 6:30am.

THAT, would truly be something.

Erin suggested accomplishing this with My Tot Clock

(a clock that changes color at a set time) and creating a clear plastic "treasure chest" full of dollar toys. We will let Mazzy pick one for instant gratification every time she stays in her room until we come get her. But, it's important that Mike and I don't oversleep and are there for her when we say we will be.

I'll let you know how it goes!

WHO WON THE SLEEP CONSULT???

After reading all of your comments under the giveaway, I really wish I could give sleep consultations to everyone. But unfortunately, there is only one winner today.

Jill B's got an 18 month-old son with no schedule who frequently wakes up throughout the night requiring excessive rocking to go back to sleep. Congratulations, Jill! Please contact me at ilana@mommyshorts.com so Erin can get your entire family some much needed sleep as soon as possible!

Erin will be back in a few weeks to put Harlow on a sleep schedule and we'll be giving a second consultation away then. In the meantime, if you would like to hire Erin to help get your child's sleep patterns under control, you can contact her here.

I previously thought hiring someone like a sleep consultant was a pretty luxurious proposition, but Erin is very reasonable. For $150, you get a phone conversation, a written sleep plan and two weeks of back and forth communication.

That's worth it's weight in gold, as far as I am concerned.

WHO WAS CROWNED CAPTION CONTEST QUEEN?

Next up, the non-Disney sanctioned Toy Story caption contest. I couldn't decide. So here are my seven favorite captions and then everyone can vote. Winner gets to help me judge the next one. I hope everyone has a good weekend! I have to work on Sunday which means Mike is spending the day by himself with the girls. He's really thrilled to test his abilities as a father, let me tell you. Death of a Blankie 9 Strategies To Keep Your Toddler Seated During Thanksgiving Dinner

19 responses to “This Week’s Winners and Losers” 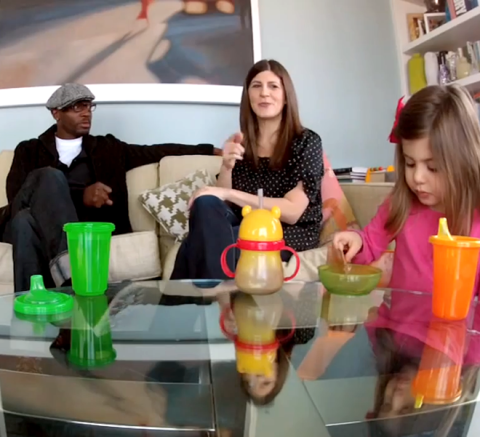