Since I posted last week about how I royally f’ed up Harlow’s dance rehearsal, I thought it was important for you all to know that she ended up totally rocking the actual recital. And here I was thinking that missing the rehearsal would mess with her mind and throw her off her game. Nope, Ilana. That’s what would’ve happened to YOU. Not your children.

The dance recital was on a Sunday night and the first thing we needed to do before heading over was convince Harlow to put on her itchy costume. The base of the costume was fine (a black leotard with zebra print leggings), but the main piece (the show-stopping red sequined hoodie) was not lined and not to Harlow’s liking.

I ended up pouring baby powder on it (I trick I learned from one of you guys that also works brilliantly on princess costumes) and Harlow was good to go.

Phew! That was a close one. Our kitchen might be permanently covered in a thin white film, but it was worth it.

This is Harlow’s first year at this particular dance studio and the theater was WAY bigger than her recital last year. The audience is also bizarrely star-studded— as only a dance recital in NYC can be. Several times while finding our seats, Mike and I would turn to each other and say, “Holy $%#$@. Is that X?” “Nooooo…it can’t be.” Yes. Yes, it was.

I dropped Harlow off backstage, in what I call the “holding pen,” where she was immediately fine and wanted nothing more than for me to leave. In the three years of preschool and one summer of camp, this is something I have never experienced before. Okay, Harlow, don’t worry. I’m outta here. That also let me quit worrying that my rehearsal screw-up would ultimately have any effect. Double phew. I joined Mike and Mazzy in the theater and waited for the show to begin. We were lucky because Harlow’s hip-hop class performed towards the beginning; I think it was the third performance. That, of course, meant we had to sit through the rest of the recital until she appeared again in the finale, which was a little over two hours away, with classes from pre-k all the way up to some very professional looking teenagers. I have to say, even though the recital was long, it was really enjoyable. There were totally impressive dance routines (from the older kids) peppered with comedic interludes (from the little kids classes.)

Harlow’s kindi-hop dance was titled “The Red Riding Hoodz” and they were adorable. I couldn’t decided whether to photograph or film the recital so in the end, I made the very-uncharacteristic decision to enjoy the show by actually watching it with my eyes instead of through my iPhone and then immediately regretted it once her performance was over. Thankfully, Mike took video and my friend Brianne from Stroller in the City, who came equipped with a real camera and happened to be sitting towards the front, surprised me by emailing a few pics the next day. Thanks, Brianne! I’ll put some of the video that Mike took in my next vlog. For now, you’ll just have to trust me when I say that Harlow did AWESOME. She followed all the steps, stayed on beat, looked truly happy to be up there and didn’t suddenly rip off her jacket in a “NO MORE ITCHY COSTUMES” protest.

I’d also like to point out that Celebrity X seemed to be struggling with whether to photograph or film her kid’s recital… so you see? Celebrities! They are just like us!

After it was over, I turned to Mike and said, “Am I looking too much into this or is Harlow really good???”

“I think you’re her mother,” Mike told me.

Mike might not think we have the next prima ballerina on our hands (or whatever the hip-hop equivalent would be) but he was really really proud. Harlow danced around outside like she wanted to go back on stage for an encore. I know that feeling. Every time I’ve ever been on stage or spoken publicly, I’ve been really nervous beforehand and then wanted to do it again immediately after it was over. Not because I messed it up, but because I realized that it wasn’t that big of a deal to be up in front of people. I would love the chance to do it again without the nerves and actually enjoy the moment while I was in it.

Harlow though, really seemed like she was able to enjoy being up there the first time around. She might not have a huge smile on her face in the dancing photos, because her default expression is always one of intense concentration, but she loved it. I could tell. A few days later, I was talking to some of the other moms who have older kids enrolled in more dance classes and I decided I want to send Harlow to both ballet and hip-hop next year. I called Mike to tell him. “WHO ARE YOU TALKING TO??” he asked me.

“Just some of the other moms from dance class.”

“WHAT ARE THEY FEEDING YOU???”

“I don’t know. I just think if Harlow really likes dance, then why not give her a shot at getting actually good at it?”

We haven’t really found Mazzy’s thing yet (the only extracurricular activity she’s stuck with is gymnastics and she wants to drop that next year), so I guess I’m a little excited to have a 4yo with something she’s already passionate about. Plus, it makes planning after school activities a hell of a lot easier.

So, we’ll see. Even if all Harlow gets out of a dance education is the ability to dance her heart out at high school dances, that’s still one step ahead in life than I was. In fact, here’s Harlow at her cousin’s Bar Mitzvah a couple of weeks ago.

No danger can come from that. 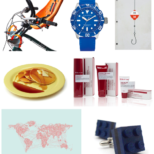 If You Haven’t Gotten a Father’s Day Gift Yet… Win a Souped Up Swag Bag from the Mommy Shorts Book Party!