Harlow Rocks Pajamas on the Streets of NYC Harlow started camp last week. It’s pretty much just an extension of her school year through June, but they try to make it as different as possible with special themed days. For instance, this Wednesday is Costume Day and last Wednesday was Pajama Day (not to be confused with Mazzy’s made-up Pajama Day in kindergarten).

Wednesday’s Pajama Day worked out PERFECTLY because Apple Park had just sent me a big box of their newest stuff, which included blankets, books, and new bunny PJs for Harlow.

Harlow has worn her Apple Park lambie PJs to death and they were getting a bit snug, so I was happy to replace them. This also meant Harlow looked publicly presentable in her pajamas as opposed to her belly jutting out in one size too small. (Although that looks pretty cute too.) “Yep. The teacher said you are allowed to bring one stuffed animal.”

“Can I bring my new pack pack?” (That’s Harlow speak for back pack).

“Sure!” I helped her put on her new owl back pack. Harlow didn’t carry a backpack last year but for camp she needs to pack a bathing suit and towel for the sprinklers. Let me tell you, Harlow is VERY proud when she puts on her “pack pack”. She knows it’s a “big girl” thing.

Then Harlow completed the look with a pair of sunglasses. Because that’s how she rolls. Apple Park has a been a favorite of ours ever since they sent us a bunch of their signature Picnic Pal pajamas, stuffed animals, hooded towels and children’s books to make our summer house feel more like home for the girls. Mazzy has been carrying around Apple Park’s pink bunny backpack for her entire year of kindergarten, which incidentally is over at the end of this week. SOB! (I’m sure you’ve noticed it in almost every photo I’ve posted of Mazzy on our school commute.) Harlow has been sleeping with several Apple Park items at the summer house (including the mouse ballerina blankie I mentioned above), which saves us the trouble of bringing Harlow’s blankie from the city back and forth. Mazzy is another story since she is still quite attached to her Boo. There are actually five BOOs but Mazzy likes to sleep with ALL of them and doesn’t believe in separating one from the pack. She’ll be taking that pile of rags to college one day, I’m sure.

They also both use their Apple Park towels pretty religiously. Starting in July, Mazzy will be going to a full day of camp and Harlow will be staying mostly at home. I have high hopes for getting both Mazzy and Harlow more comfortable in the water and was pleased to find a Picnic Pals board book about a duck learning how to swim. All Apple Park’s board books tell simple stories weaving in subtle messages about topics like trying new things, sharing and not being afraid of the dark. Besides being cuddly and adorable, Apple Park’s products are all organic and designed to be ultra safe and eco-friendly. In addition to the Picnic Pals, they have a line called Farm Buddies which is available at a lower price point.

The Farm Buddies are actually some of my favorites because they have wackier characters like Pork Chop, the karate chopping pig , Frenchy Fox, the scarf-wearing fox, and Catnap Kitty who is dressed in a bikini.

What child wouldn’t want a cat in a bikini??

Well, lucky for your children, Mommy Shorts readers are getting 20% off between June 8th- June 22nd. Just shop here using the discount code MS20 at checkout.

AND… I’m giving away a $200 Apple Park gift card today! Just follow the simple rules below.

2) Then visit the Apple Park website and come back to tell me your #1 pick in the comments below.

Although I’ll warn you, picking between Frenchy Fox and Robbie Raccoon is pretty HARD.

I’ll pick a winner at random on June 22nd.

Good luck getting that Catnap Kitty!

And the winner is… Summer Havron, who wants the cubby organic cotton picnic pal pajamas. Scary Question for Dr. B 219 responses to “Harlow Rocks Pajamas on the Streets of NYC” 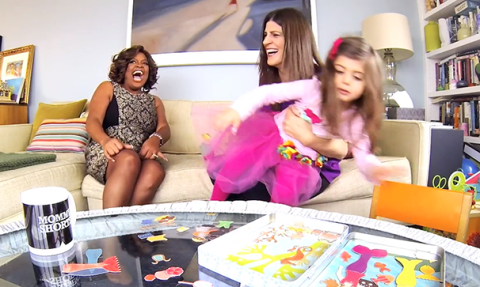