When I originally designed our second bedroom, it was to become a nursery for my newborn baby girl. It had a big heavy three-drawer dresser that could double as a changing table, a crib, a bookcase, a small storage ottoman and a cushy glider for breastfeeding. It was a serene space and I carefully curated the shelves of that bookcase like it was my second job. That room served us well, but it was never really meant for a growing girl. The book shelves became over crowded, we had no storage space for toys and fitting both girls’ clothes into one dresser was a pain. Mike kept claiming Mazzy and Harlow had too many clothes and I was like— no they don’t, they just have to fit it all into one drawer!

Shoes and socks were also a situation, deposited in six little bins that could barely be squeezed underneath the beds. Especially when we moved Mazzy to a full bed with only a box frame underneath. That’s when things started piling up in front of the bookcase. See that pink crumpled thing in the front? That’s the hamper and it hasn’t stood up straight in over three years.

Dress-up clothes were stuffed into the ottoman like clowns in a clown car. And then piled high with stuffed animals on top. Making finding the pink tutu with the bow on top and the matching tiara near impossible. “I’m sorry sweetie, that’s too hard. Pick something else.” These were all the things I told the Land of Nod design service team when I filled out their questionnaire online, along with the room measurements, of course. (FYI- the Land of Nod design services are FREE, which having been through the process, I find very hard to believe.) Very quickly, I got an email back from a woman named Kim who said she would be working with me to redesign the space for the girls.

We talked on the phone and I told her about how the room had become a disaster area and how I was struggling to figure out how to fix it. For one thing, my husband wanted bunk beds and I thought it was really important for Mazzy and Harlow to each have their own side of the room.

Secondly, I realized we needed to let the glider go (it was taking up valuable space), but I still used it to read the girls bedtime stories, often with both of them sitting on my lap at once. I was sad to give that up. I told Kim about the plastic bins full of princess stuff and the plethora of dress-up clothes and Harlow’s love of necklaces. A love too big for any jewelry box. I told her about my dining room table and how it had become a home for crayons, paper, craft items and coloring books that we transferred daily in piles to the couch when we sat down to eat. I told her about all the art Mazzy brings home from school. Piles and piles of papers she thinks are of utmost importance, not to mention the three-dimensional wood projects! My entire apartment had become one big storage unit for my girls.

I also told Kim about all the issues with the room that make it hard to fill with furniture— the air conditioner that juts out over a foot into the room, how the window isn’t centered and the column that prevents you from putting two beds against the back wall. I told her that the ceiling is concrete so we have no overhead lights and have to rely on lamps.

As I went through our numerous issues and expectations, I became convinced making this room work for my daughters was an impossible task. Maybe she would suggest I move at the end of the call?

But Kim seemed undaunted and told me she would send along a mood board, room mock-up, and a shared Pinterest board with all the products she was considering.

The process moved quickly from there and made me a little a nervous, to be honest. I realized we were designing the room for two little girls, making the jump from Harlow as a baby. She wouldn’t have a crib anymore and it didn’t make sense to incorporate a changing table. I knew I should probably start changing Harlow in the bathroom anyway, to get her used to doing her business there, but still, this was an adjustment. Was Harlow ready to be in a big girl bed??? I didn’t really know.

Two days after our phone call, Kim sent a mood board of the bedding with a few key pieces:

I loved it (although I was still unsure about the bunk beds) and gave my approval. A few short days later, Kim sent a second email which included a layout of where all the furniture would go in the room… She also sent an invite to a private Land of Nod Pinterest board with links to all the products and paint swatch options for the walls. Lastly, Kim sent pencil illustrations of how each side of the room would look when it all came together… I have always been a big believer in letting people who know what they are doing do their jobs (something I learned from being a Creative Director in advertising for 15 years), so I didn’t really change anything Kim presented. Sometimes the hands-off method works out for me and sometimes it doesn’t, but I don’t have time to micromanage room decor if I don’t have to. A lot of the items weren’t things I would have chosen myself (like the army green wall shelves) but I recognized this is why Kim has this job and I don’t. Every room should have unexpected choices and if it was left in my hands, everything would be pink.

I did have a few practical issues that I brought up— like Kim’s first design incorporated only one dresser, which I know looks better in a small room, but really didn’t meet our needs. I also wasn’t sure we would have enough lighting, so Kim took a second stab at that too.

Kim also provided two layouts— one with two separate beds and one with the bunk beds. With a gentle nudging, I had to agree— the bunk beds made more sense.

Kim revised the layout to incorporate a second dresser and added more lamps and then I  took a leap of faith and went for it.

Stay tuned tomorrow for the reveal!

Follow Mazzy and Harlow’s room design board on Pinterest for links to all Land of Nod products.

A huge THANK YOU to Land of Nod for working with me. Tomorrow, I’ll have a discount code for everyone too! Frozen is Far from Over If Your Kid Won’t Stop Begging for a Dog, Try Squeakee Instead The Inside Scoop on the Back-to-School Situation

27 responses to “Outgrowing the Nursery” 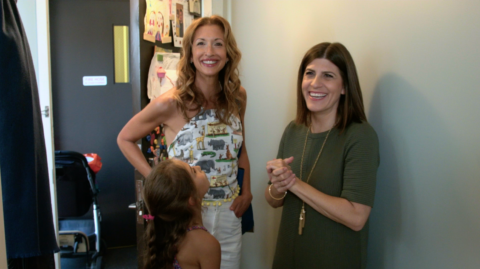