You know how you see an issue of some tabloid magazine with a headline like, "Jen Aniston Devastated By Wedding Setback" next to a picture of her in tears and think, "Oh no! Jen and what's-his-name are through! Now she'll never have Brad's baby! I mean– that other guy's baby!" But then you read the article and realize there is just a little construction delay on her pool terrace and all is fine?

And it wasn't just Mommy Shorts that was knocked down a peg, IT WAS ALL OF YOU!!!

Here's the headline they ran yesterday:

The Daily Mail goes on to talk about how the mother of the winner of the Epic Baby Hair Contest "found herself amid a firestorm of accusations from other parents claiming that her child was wearing a hairpiece". Then she was "forced" to provide proof. (For the top 100 contestants click here and here, and for the twelve finalists click here.)

A "firstorm of accusations"?! That sounds FORSERIOUS! "What started out as a friendly competition between proud parents showing off their kids’ quirky hairdos quickly devolved into an acrimonious Facebook clash… The heated debate concerning little Layla’s untamed mane has drawn more than 400 comments on Mommy Shorts’ Facebook page, dividing the parenting community in the process."

You hear that, we are a parenting community DIVIDED!

The article even singles out quotes directly from my fanpage, something I didn't even realize was legal but I guess there are no rules anymore. So please beware– if you said Annette Funicello was wearing a wig, there is a chance your name and quote actually appears in the Daily Mail. And apparently, you weren't just writing a comment, you were "FUMING" while writing it!

The article goes on to talk about how scores of people rushed to Layla/Annette's defense and how she ultimately prevailed ("won by a hair!"). Then it finishes by saying some complimentary things about my site and the contest, amidst phrases like "hairy situation", "tangled matter", and my favorite "coif kerfuffle". By the end, I hope it leaves readers with the feeling that, much like Jen A's uncompleted pool terrace, there was not really a controversy after all.

FYI- I've emailed with Layla's mom, just to make sure she wasn't actually upset over the whole thing and she laughed and said of course, she was not. She was contacted by the Daily Mail but never said she was outraged or angry. She said she enjoyed the article though, knowing it was "over the top" and "a bit of fun", was gracious about the win and said it will make a great souvenir for her daughter one day.

So there you have it.

All manufactured over a baby hair contest.

For the record, all the quotes the Daily Mail used from me were from an interview they did about a month ago at the onset of the contest. I had no idea this current article had been written until after it was published. I spent about a half second being really pissed off about it, then reread and realized it was hilarious.

I'd also like to say, I believe I have some of the most intelligent, supportive, funny commenters/fans/followers/readers/whatever-you-would-like-to-call-yourselves on my fanpage and I love you all dearly.

The wig skeptics. Annette's mom. Even Daily Mail writers, who are clearly lurking around just waiting for someone to say something they can turn into VERY IMPORTANT COMMENTARY on facebook antics and baby hair rivalries.

Now have a good weekend and try not to get into any COIF KERFUFFLES. It's hard for you guys, I know.

PS: If you haven't already, join the Mommy Shorts facebook page. Especially if you're a HEARTLESS BASTARD who would accuse another mother of making her baby wear a wig– you'll fit right in. The Only Viral Videos That Mattered In 2011 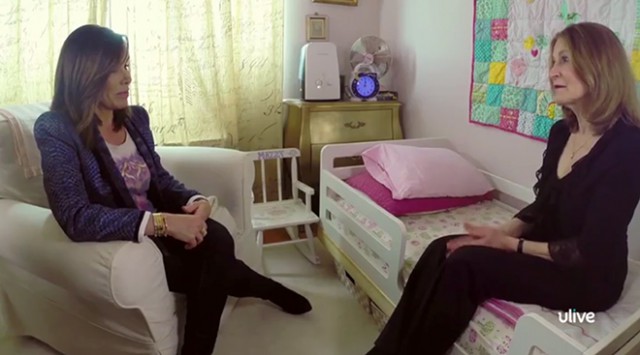