If Daddy Can Put the Baby Down for a Nap, What Else Can He do? This past weekend, while visiting friends in DC, I made two important discoveries. The first is that the only thing more hazardous to a baby than a house with no children is a house occupied by a four-year-old girl who has a thing for princess dolls with teeny tiny shoes. The other is that my husband, it turns out, can successfully put the baby down for a nap. He might, dare I say, be even better at it than I am. I know—SHOCKING.

in a downstairs office with tons of flashing computer lights so I thought we were already pushing our luck that she had gotten a full night's sleep (thank you, sleep training). I certainly didn't think the arrangement would give us a chance in hell that she would go down for a nap. At the appropriate time, I made a dutiful yet half-assed attempt to allure the baby with the obvious benefits of rest and relaxation. But the second she put up a struggle, I brought her upstairs and declared it impossible. Then something unexpected happened. Mike took the baby from me, said he'd give it a shot and headed back downstairs. I smirked knowing his naptime history.

Previously, Mike's prefered method for getting the baby to go down for a nap is to stick her in the Bjorn and take a walk. This is because Mazzy hates to nap in her crib and Mike hates to hear her cry. If you'll remember, I had to wait for him to go out of town before I was able to successfully implement sleep training. So naps usually fall on me. Along with most other baby-related things. It's not that he doesn't help out, it's just that he makes it clear that I have been appointed baby gatekeeper by asking a lot of questions. When I ask him to change the baby into her pajamas, he asks me which ones. Just pick something. When I ask him to get the baby's dinner ready, he asks me what to prepare. I have no written meal plan. Just take a few things and mash them in a cup.  Aren't we both just making this stuff up as we go along? When did I become the resident baby expert? Maybe it was while he was sleeping…?

But then something even more unprecedented happened than my husband offering to give naptime a shot in the first place. Mike emerged from the DC-home-office-baby-sleep-quarters completely victorious. And then later that same day, he did it AGAIN. Mike was so proud of his newfound nap inducing skills that he acted like he had one-upped me in some kind of self-created parenting competition. Patting himself on the back as if he had just snatched the Parent of the Year title with a write-in vote. Ahhh… so naive.

Pat away, dear husband! Rub your naptime triumphs in my face! Earn the accolades of moms and dads in states all along the eastern seaboard! Hold that Parent of the Year Award up high! I'll even add in a cash prize and a gift certificate for a massage at Bliss. I concede.

Nap time, my love, is YOURS. This 5yo Geography Genius is Smarter than Congress

15 responses to “If Daddy Can Put the Baby Down for a Nap, What Else Can He do?” 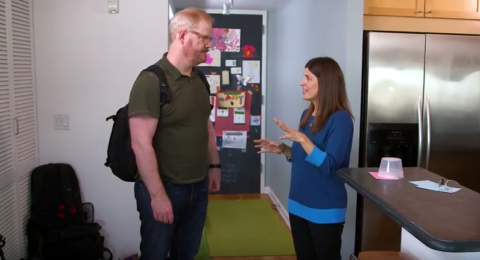