Fill Your Kids’ Shelves with Books About Black Experiences The stories on the news right now are horrifying and make racism in this country seem insurmountable. But we must consider that by not acknowledging the existence of racism with our kids, including all the smaller examples that do not make the news, we are contributing to the problem.

This week, Harlow and I read “A Kid’s Book About Racism.” It’s a simple book designed to introduce the topic to your kids and pave the way for more conversation. After we read it, Harlow told me that she knew people who had experienced racism. “Who?” I asked. “Martin Luther King, Gandhi and Rosa Parks,” she said. I told her that was true, but then I made sure she understood that racism still happened today. And I reminded her about something it said in the book— that racism can happen in big and small ways. I told her that every person of color she knows has most likely experienced racism too.

I said this the other day, but I will say it again— When I first had kids, I wanted to protect them from all the bad stuff in the world, but then I realized that option only comes from a place of privilege. Over the years, I’ve found that exposing my kids to topics I find uncomfortable helps create empathetic, understanding and overall better human beings.

When Mazzy and Harlow were babies, I had Taye Diggs over for the Mommy Shorts Show. He was promoting his children’s book “Chocolate Me” which was about a Black boy whose white friends made fun of his skin color and facial features. I remember reading that book to Mazzy and feeling really weird about it. I thought— why do I want to give her the idea that some people think having brown skin is bad when she would never come to that conclusion on her own? Regardless, she loved the book, as did Harlow when she got older, and asked to read it over and over. We’ve read that book so much, the pages are torn and the binding is coming undone. It never made my kids think having brown skin was bad. It made them more interested in learning about people of all different colors and backgrounds. It made them understand that the world isn’t perfect and everyone has different struggles. It made it easier to discuss antisemitism. It made them more prone to pick books with POC as the main characters.

Here are a few of my kids’ favorite books, currently on our bookshelf: Martin’s Big Words: The Life of Dr. Martin Luther King, Jr. is an excellent way to introduce your kids to Martin Luther King. Using some of his most famous quotes, along with beautiful illustrations, it takes you through his life as a young boy all the way up to his assassination. It touches on segregation, the civil rights movement and how the civil rights movement was met with resistance. But mainly it is about the power of words and how speaking up can drive change. Last Stop on Market Street is about a boy and his grandmother who are riding the bus one afternoon. The boy is noticing various luxuries they don’t have and asking his grandmother about them. She helps open his eyes to all the ways in which they are rich, even though they may not have certain material items.

Mae Among the Stars by Roda Ahmed, Illustrated by Stasia Burrington: Mae Among the Stars was inspired by the true story of Mae Jemison, an engineer and physician who became the first African American woman to travel in space. It’s a wonderfully aspirational book which tells the story of Mae’s life long passion for space science. It teaches kids to believe in themselves and have the courage to follow their dreams. Jabari Jumps is about a boy who is excited to jump off the diving board at the city pool, but has to conquer his fear of heights. Kids see their own stalling techniques mirrored in Jabari’s actions, such as allowing other children to pass him in line so they can climb up the tall ladder before him, and the excuses he comes up with to delay his turn. Jabari’s compassionate father patiently encourages him despite his fears.

I am Rosa Parks by Brad Meltzer and Christopher Eliopoulus: I am Rosa Parks is from the “Ordinary People Change the World” series which uses a kid-friendly cartoon style to tell the life stories of important people in history. Harlow loved learning that Rosa Parks was one of the smallest kids in school and that when she refused to give up her seat for a white person on the bus, she was only 42 years-old! As a kid, I always imagined that she was an elderly lady. Also, later on, when we read about Claudette Colvin and how she refused to give up her seat on a bus before Rosa Parks, I thought Harlow would get confused. But instead she said, “Rosa Parks was inspired by Claudette Colvin just like Martin Luther King was inspired by Gandhi.”

Julián Is a Mermaid by Jessica Love: Julián Is a Mermaid  is about a young boy who is obessed with mermaids. After seeing three women dressed up as mermaids on the subway, he attempts to dress up just like them, creating his own tail and headdress. When his grandmother catches him, he thinks he might get in trouble, but instead she takes him to the Mermaid Parade so he can celebrate exactly who he is.

The Story of Ruby Bridges by Robert Coles, Illustrated by George Ford: I bought the The Story Of Ruby Bridges when Mazzy learned about her in school and noticed that Ruby wasn’t included in the first Good Night Stories for Rebel Girls book. I think Ruby Bridges’ story leaves a big impression on many kids because she was only six-years-old when she became one of the faces of the civil rights movement. I knew that she was the first black girl to attend an all-white school in New Orleans after a court ruling in 1960, but I did not know that all the parents pulled their kids out of the school and she was taught alone in that school for a full year. The story is partially told through the eyes of Ruby’s teacher and really hits home how strong Ruby had to be to walk proudly through angry mobs of white people every day so that she could get the first grade education that was rightfully hers.

Crown: An Ode to the Fresh Cut by Derrick Barnes and illustrated by Gordon C. James: Crown: An Ode to the Fresh Cut transports readers into barbershop culture through vivid illustrations and details. The book is a celebration of self-confidence and self-worth, and a window into one boy’s transformation that enables him to feel recognized and powerful. Stand Tall, Molly Lou Melon is about a girl who is very small with a high-pitched voice and buck teeth, but she was blessed with a grandmother who taught her to always have confidence and be herself. When Molly moves to a new school and confronts the class bully who calls her “shrimpo,” her ability to believe in herself is put to the test. Ultimately, she proves that you can be small and still stand tall by having a healthy dose of self-esteem.

Henry’s Freedom Box: A True Story from the Underground Railroad, by Ellen Levine and illustrated by Kadir Nelson: Henry’s Freedom Box is a true story about the underground railroad, which follows a slave from the South who shipped himself in a box to find freedom in the North. It’s a suspenseful heroic story with a happy ending, but also a great tool to introduce your kids to the concept of slavery. It was a challenging one to read to Harlow because in the book, Henry’s wife and children are sold to a different slave owner and he is devastated. At the end of the book, Henry is free, but I remember Harlow asking at the end, “Did he ever get to see his family again?” And the answer I had to give her was “no.”

If you are a white parent, it is our responsibility to educate our kids about the suffering of Black people at the hands of white slave owners and the injustices that still surround us today. Even if it is uncomfortable for us. It is also our responsibility to share books with our kids that show issues they relate to like fitting in, having big dreams and standing up for ourselves. This way kids can appreciate our differences as well as recognize how we are all alike.

Literally, the easiest thing you can do is have books on your shelves about Black experiences. Your kids are never too young for this. “A Kid’s Book About Racism” by Jelani Memory is a great introduction to the topic, but please do not stop at this one book! For more options, here are a few children’s book lists I’ve put together in the past:

21 Books that Teach Kids to Be Kind and Inclusive

I will continue to find more examples, including books that more specifically address racism. And I’d love to highlight more children’s books by Black authors. I’m also currently putting together a great list of chapter books that Mazzy has loved over the past few years.

FYI, when I first posted about A Kid’s Book About Racism, I had no idea I would sell so many copies. I posted with an affiliate link so I earn a percentage of each sale. I’ve decided to donate any money I make off these sales to Black causes. Originally I said I was going to donate it all to the Minnesota Freedom Fund but then they posted that they have had so many donations and encouraged people to donate to other organizations. So, I contacted the author of the book and we are trying to decide together where the money would be of the most benefit. I will keep you posted! An Update on Our Current Living Situation 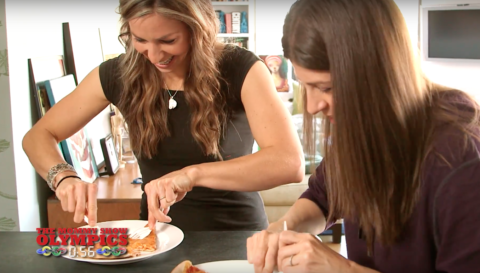