Can Beat Bugs Save Parents from Kid Music? Today, Netflix debuted an animated kid’s show called Beat Bugs which features major stars singing music made famous by the Beatles. The show got me thinking about how divided music has become in our house, now that we have four different people with differing musical tastes.

For instance, the other day, we were driving in our car when Mazzy made a very important announcement.

This was curious. First of all, we’ve had our new car for over a year now. Secondly, we got the upgrade of the same car after our lease was up. I barely notice the difference.

Mike and I exchanged looks. It’s true. In our old car, we used to play CDs with music the kids liked; classic tunes like “Wheels on the Bus” and “Old MacDonald”, silly songs like “Taxi” from Music for Aardvarks and a CD from Ivan Ulz with a song called “Firetruck” that Mazzy and Harlow both loved more than I could possibly understand. They requested “Firetruck” on repeat so many times that Mike and I almost threw that CD out the window.

Kid music took over our car for about five years. Then we got our new car, which does not contain a CD player, and forced Mazzy and Harlow to listen to the radio.

Now, the girls love Top 40 music and will make us switch stations until they find a song they want to hear. They like Katy Perry and Taylor Swift and Meghan Trainor and seem to memorize the lyrics after listening to each song only once. Harlow loves “This is What You Came For” by Calvin Harris and Rihanna so much, that if it’s ever playing when we arrive at our destination, she makes us stay in the car until it is over.

In our house, there is a constant Battle of the Bands, with Mike opting for his old playlists from the 90s and the girls begging for the Taylor Swift station on Pandora.

They get mad when Mike turns on classic rock, which they deem “boy music.” I’ll never forget the look of defeat in his eyes when he was forced to flip off an Aerosmith song in favor of Selena Gomez.

Personally, my music tastes are more open. I don’t mind pop music at all (it’s really fun to dance to) but I see Mike’s struggle as he’s forced to sip coffee on Sunday morning to Katy Perry tunes. All of this is why I’m pretty excited about Beat Bugs and the possibility of introducing the Beatles into my home. It’s a show about resourceful puzzle-solving insects that live in the backyard, but the opening credits are set to “All You Need is Love” and in the first episode we hear both “Help” and “Lucy in the Sky with Diamonds.”

These are not shrill comical covers like you hear on other children’s shows. They are soft and melodic and easy on the ears. In fact, every episode has one song sung by a major artist. Case in point— “Lucy in the Sky with Diamonds” is sung by Pink.

I have to say, I’ve missed the Beatles. My mom used to listen to them all the time when I was a kid. I had the White Album and my Abbey Road CD on regular rotation all throughout high school and college. But then everything went digital and the Beatles weren’t online and somehow their music faded away for me.

The one exception being “Blackbird” which I used to sing to the girls as a lullaby when they were babies. FYI, “Blackbird” is covered by none other than Sia on Beat Bugs (check out this clip.)

When we sat down to watch the first episode, I was excited to introduce my kids to music I loved as a kid and potentially broaden their musical tastes to include a genre even my Pearl Jam loving husband can embrace.

After all, Eddie Vedder covers “Magical Mystery Tour” in Episode 6.

To celebrate the debut of Beat Bugs, I’m giving away three year long subscriptions to Netflix!

Just post a photo or video of your kid playing an instrument, singing a song or dancing on the Mommy Shorts facebook page or to the hashtag #jointhebeatbugs on Instagam. If you post on Instagram, you must tag @mommyshorts and @netflix.

For instance, here’s a video of Harlow singing “Let It Shine…”

I’ll be picking three winners at random on August 31st.

Good luck and enjoy the show!

This post is sponsored by Netflix. Come together with the Beat Bugs and enjoy a new family show inspired by the music of the Beatles. Now Streaming! 6 responses to “Can Beat Bugs Save Parents from Kid Music?” 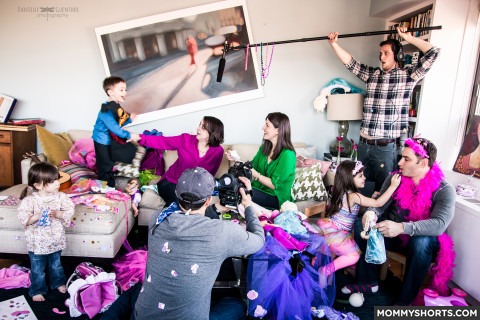