The Origin Story of “Fashion Panda” Harlow’s favorite animal for the past year or so has been a panda, so it was no surprise when she told me that she wanted to be a panda for Halloween. We went to the costume shop, because I will always opt for store bought when possible, but Harlow rejected every version of a Panda suit we could find.

The costumes were all basically furry onesies with either a full on panda hood or just the ears. I asked Harlow what she thought was missing. “I don’t want to be in a panda suit,” she said. “I want to be more like a fashion panda.”

“A fashion panda??” I asked, because what the hell was that?

Sure. That clarifies things. If you could see me in that moment, I would have looked like a giant shrugging emoji.

We went online where I looked up more panda costumes that were all routinely rejected. So then I figured we would start small. We selected black furry ear barrettes.

We discussed what she would wear on her body. I suggested a white shirt with black pants and maybe a black hoodie. She asked if we could get a furry black sweater, which we found together online. I figured it would be pretty lame costume, but if I could somehow pull off really good panda make-up it would all work out. She had gotten panda face paint at a birthday party recently and I got black and white face paint to try to copy the look. “But Harlow. You are not going to look like a panda,” I said to try to persuade her.

I said, okay, because who am I to tell my six-year-old that her costume isn’t good enough, but I truly thought that come time to dress up, she would realize that she didn’t have much of a costume and get upset. I even had a back up mermaid costume in case her panda vision all came crashing down.

Fashion Panda’s first outing was for a party on Friday night. That day, she went to school wearing a panda hat she had from last year, a shirt with a furry panda face on it and a hoodie with a cartoon panda pattern. I said, “Harlow. You are going to look more like a panda today at school than you are going to like a panda in your panda costume tonight.” When she got home later that day, she put on her ears, a white shirt, black tights, a black tutu and the furry sweater we bought special for the occasion.  I tried to sell her on the panda face paint again.

“How about black eye shadow? I can try to give you a smokey eye?”

I showed her a picture and she agreed.

I had no idea if I would actually be able to do a smokey eye, because I’ve been trying and failing to give myself a smokey eye for the past ten years. But, I shouldn’t have worried, because apparently, smokey eyes are easy peasy when you have Harlow’s enormous eye lids. Anyway. Here she is— FASHION PANDA. I feel foolish for ever doubting her. Also, I should tell you that I ordered two pairs of furry black ears by accident and once I saw her costume, I kinda wanted to do it myself.

“Harlow? Can I be a Momma Fashion Panda?”

“YES!!!!” I was thrilled to hear that Harlow is still at the age when she is excited to be twinning with mom. I put on my ears, a smokey eye (I swear I did the same eye make-up that I used on Harlow even though you cannot see them in this photo because my lids are too small) and a black faux fur coat. I’m not slaying the look nearly as well as Harlow, but it’s still the perfect costume for a mom who wants to acknowledge Halloween with a minimal amount of effort. My girl is a genius. I will be a Fashion Panda every year for Halloween from now on. It Wouldn’t Be Christmas Without Captions It’s Easy to Steal Halloween Candy from a Baby

4 responses to “The Origin Story of “Fashion Panda”” 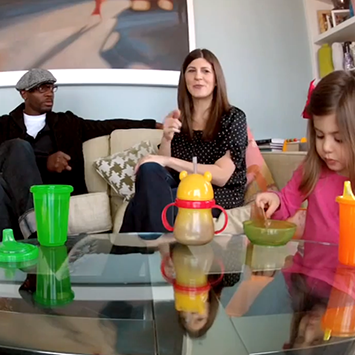