That Time I Lost Harlow I think it was about a year and a half ago. And I never wrote about it because I felt so awful and embarrassed. But then yesterday, someone started a thread in the “Remarkably Average Parents” facebook group about losing their kid in a crowd. Other parents chimed in about similar experiences and I realized it happens to everyone. Or at least the “remarkably average” amongst us.

I actually got off easy. Why? Because I didn’t even realize Harlow was missing until a total stranger brought her back over to me in tears.

Let me take a few steps back…

We were at the Chowder festival in Southampton. It takes place in the middle of town on a big lawn with a huge tent filled with chowder stations, participating restaurants and judges. It’s really meant for adults, but outside the tent they have kid-friendly activities like face painting and crafts. There’s also a band shell with performances on one side, a playground on the other, an adjoining pond with boat rides and tons of food trucks lined up. Let’s just say, there is a lot going on. And it’s crowded with people of all sizes, walking in every direction.

Since Mazzy and Harlow are not interested in chowder, Mike and I were taking turns going into the tent to sample soup while the other parent watched the kids. When it was my turn to watch them, Mazzy and Harlow wanted to get their faces painted. We must have stood on that line for over an hour. It was some pretty intricate face painting so each kid was taking forever. Mazzy went first. My sister was there with her kids so when she was done, Mazzy ran off to play with them in the playground. Then Harlow was up. My dad was there also (it was a family affair) and while Harlow was busy getting her face painted, he introduced me to two people from Germany who were interested in discussing my blog. My dad is always talking me up to someone.

We started chatting. One of the men was a publisher who had recently become a dad and he was asking me questions about my book. It had just come out and I guess there was a lot to talk about. Oh look, my dad even brought a copy! (Of course he did.)

We were standing right next to the face painter the whole time, a little off to the side from where we were originally, so as not to look like we were still in line. I guess I was turned away from Harlow while I was chatting, so when her face was finished, she didn’t see me. I didn’t see that she was done either. So, I imagine she did as most children would do when they think they have been completely abandoned by their mother— go into complete panic mode and then run off into the crowds to find her.

Anyway, my conversation was interrupted by a heartbreaking cry. It sounded familiar. I turned around and there was Harlow, running over to me with the most terrified look on her face, her hand in another woman’s hand.

“Oh sweetie! Are you okay? Did you think you were lost?”

She burst into tears. Like big convulsing tears. She was shaking and tiny and the saddest I have ever seen her.

“She didn’t know where you were,” the woman explained.

I thanked her and tried to explain that I was right there the whole time. I never walked away. I just took my eyes off her. “I would never just leave you, Harlow!” I assured her. But, of course, none of that mattered. Not to the woman. Not to Harlow. I was just trying to justify my own actions. Which made me feel like a total failure as a parent to all involved.

I never told anyone except Mike.

But a year and a half later, in a facebook group, when someone shared their own feelings of failure after losing a child for a few minutes, it felt more like a parental rite of passage.

That time I thought I lost my kid. Everyone has got a story. What’s yours? Woes of the Second Sibling Remember When Jim Gaffigan Came Over?

25 responses to “That Time I Lost Harlow” 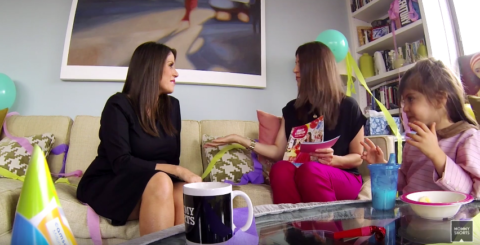