I’m back at our house for the summer, spending a full two months here with an actual backyard, a car, elbow room in the kitchen and a closet JUST FOR TOYS. It is heaven.

The summer house is also great because it allows the kids to go to a real camp with grass and trees and a pool and tennis courts. Basically, it’s the polar opposite of Mazzy’s first experience with NYC camp, which was a sprinkler on gated concrete.

It’s all wonderful except for one pretty major issue… It’s Harlow’s first summer going to camp and it’s only her second week, so maybe by next week, this will change, but as of right now— drop-off is BRUTAL. Pick-up isn’t too bad (Harlow is smiling and seems happy) but the second I ask her how her day was, she gives the most masterful pout ever and says, “Not good.” Sometimes, there is a foot stomp thrown in for good measure. Other times, her arms cross and she refuses to look at me. Most of the time, the pout, the stomp, the arms and the downcast eyes all work together.

It started with semi-lukewarm feelings to camp on the first day and then once Harlow actually experienced camp, it got progressively worse. Yesterday morning, I very nearly turned around and took her home.

Mike was with me and convinced me to keep her there, knowing that we both had to work and she would spend the whole day on the iPad or worse— not allowing us to get anything done.

Harlow had trouble this past year with preschool drop-off too, but we had little rituals in place that made it all bearable. Basically, I stayed with her until she was in a good place. The teachers always had stations set up for the kids to do projects and I’d sit and do an activity with her until she felt comfortable. Usually, after about five-ten minutes, Harlow would accept the inevitable goodbye and initiate our goodbye routine, which as I’ve mentioned before, consists of hugs, kisses, love pats, crowns, rainbows and a couple other things I can’t remember at the moment. She didn’t smile or anything crazy like that, but she did display a chin up attitude and a brave face that told me I could leave without feeling too guilty.

Camp is another story, because there isn’t really a way to ease in. She starts yelling “I don’t want to go to camp!” from the second we leave the house. The first few days, I lingered a bit until she came around like she did in preschool, but yesterday morning, she was nowhere close to okay.

Couple that with the fact that I am leaving her with counselors that seem like they are kids themselves, as opposed to trained teaching professionals and I am just not sure what I am supposed to do with Harlow when she FREAKS THE F*CK OUT. I know the experts say to hug and hand over, without much fuss, for the least devastating drop-off, but Harlow was literally hyperventilating and I could not walk away while she was in that state. So, I took her a few yards away from the group and over to a bench to soothe her. I held her close and stroked her hair until her breaths finally returned to normal.

“NOOOOOOOOOO!!!!!” And the sobs started right where they left off.

“Can you give me my love pats?”

“Do you want to touch my necklace?”

Eventually, I carried her over to the playground which is always her group’s first activity of the day. “Look! There’s Luke! Don’t you want to play with him?”

She was even inconsolable when Mazzy came over to visit. “Harlow, can I give you a hug?”

In general, Mazzy has been great about trying to get Harlow excited about camp by telling her all the reasons she has loved it for the past few years, but unfortunately, her big sister’s tactics haven’t worked.

I held Harlow until it was time for tennis and then carried her there too, while the counselors offered up everything they could think of.

“Harlow, do you want me to hold you?” asked her favorite counsellor.

“No,” she gulped into my shoulder.

“Do you want to hold the clipboard?”

“Do you want to help me take the lunch orders?”

“What do you want, Harlow?”

The counsellors assured Mike and me that Harlow was usually fine a few minutes after we left and that she always had fun throughout the day. She said she would take Harlow into tennis and we could watch from the viewing window above. Harlow went into the counsellor’s arms willingly but then flipped out when she realized this meant we were leaving.

“We’ll be right up there, Harlow!” I said, pointing to the window.

Once at the window on the second floor, I watched Harlow’s face contort and her arms stretch out towards us, her screams silenced by the glass between us. Her face said, “Mom! Dad! Why are you abandoning me???”

Mike stated the obvious, “It’s so much worse now that we’ve lingered here.”

“Maybe we should just take her home,” I said.

“No. If we do that, she’ll pull this every time and we’ll never be able to send her.”

I knew he was right.

After a few minutes watching Harlow scream through the window, we blew our kisses and said goodbye. Then we walked heartbroken back to the car. We drove home in silence and just as we pulled into our driveway, I heard the ding of a text message notification.

It was a picture of Harlow, sent by the counselor, smiling and enjoying morning snack time. Her eyes looked sad, but she was no longer crying. And when I picked her up a few hours later, she actually told me she had fun.

Whether that translates to no-drama tomorrow, I’m guessing not. But maybe it’s a start? Or at least, maybe it’s a cue for me to feel better about sending her and not to draw the goodbye out. Like a wise person told me on snapchat after I spoke about Harlow drop-off struggles, “Kids know exactly how to break your heart.”

If anyone has any tips for separation anxiety, please share them below! Taking Down A Tantrum 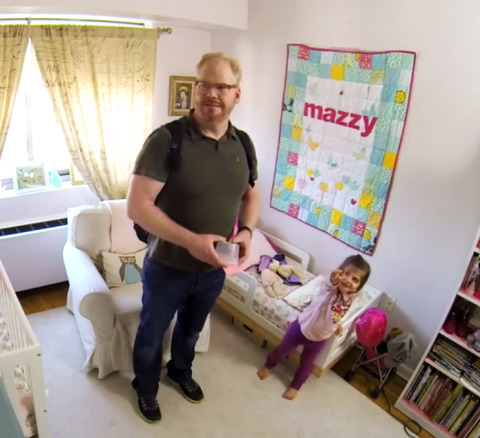