We Bought a House: The Inside Edition A few weeks ago I introduced you to our brand new summer house. Well, brand new if you think 1987 seemed just like yesterday. Didn’t you love hammer pants and neon EG socks? I’M STILL WEARING MINE!

The house is not new. It belonged to a very nice elderly couple for twenty-seven years.

FYI- The couple is alive and well and living in Boca or something. Lest you think we ripped it from their dead hands while they were still warm. Also, they might not be nice. I’ve never met them. That was just an assumption based on the elderly part. For all I know, they are the meanest couple to ever retire in Florida. Maybe they moved there to steal pension money from aging teachers in nursing homes or something. But let’s pretend they are absolutely lovely and if you met them, they’d hand you a Werther’s candy and a cup of tea before asking if you wanted to play a game of Rummikub.

Anyway. You’ve already seen the outside of the house. Today, I’d like to show you the inside.

I’m sure most bloggers would have a master plan of starting with the hideous “before” pictures and then document months of DIY renovations until they wowed you with the grand reveal of their dream home at the end— all made on a shoe string budget with poster board and glue!

I am not so confident.

When we did the final walk through of our house, I thought we had made the hugest mistake of our lives. There’s a reason real estate agents show houses fully furnished. It distracts you from everything wrong with it. Seeing the house completely empty made the flaws suddenly reveal themselves like a bad boyfriend on vacation.

How had we never noticed that the master bedroom didn’t have a closet? Or that the really low wall at the top of the stairs was the perfect place for small children to plummit to their death? Who in their right mind would choose mauve formica for a bathroom? Is that a cut-out for a cat in the kitchen cabinet? Plus, the house looked dingy as hell.

To be perfectly honest, I forgot to take “before” pictures. I was busy having a panic attack brought on by a massive case of buyer’s remorse. Plus, I had no faith in our “after” pictures.

But, I am happy to report— a new paint job, new floors and a few minor cosmetic changes (like raising the death trap wall and creating a closet out of thin air) can make a HUGE difference in a house circa 1987.

The floors downstairs were in good shape so we sanded them down and restained them. We took out the wall-to-wall carpet upstairs and put down new wood floors to match. Then we painted everything a gloriously clean snow white. (I belive Snow White is actually the name of the paint color.)

To show you how far we’ve come in a few short months, I looked through Mike’s phone and stole his “before” pictures. Thank god SOMEONE was thinking clearly.

There is not a ton to show because the house is not furnished yet— we’ve got a bridge table in the kitchen, a couch from the previous owners covered by a sheet in the den, an inflatable mattress in the master bedroom and two beds on loan from a friend in the girls’ room. But I still think you can see how awesome the place looks from a minimal amount of work. Death trap wall (we raised it by evening the gap to make it a more symmetrical shape— it is now one of my favorite details of the house): My other favorite part of the house is the sun porch. It is perfect and we are not touching it. The bathrooms and the kitchen are outdated, but not so bad that we need to renovate them just yet. We are just excited to be able to fit more than one appliance on the countertop. And we have absolutely no idea how to handle all the cabinet space. Do you like my microwave? I think it might be the very first model ever made. It doesn’t show anything on the time clock but it does seem to cook things. Radiation from 1987 isn’t any worse than radiation in 2014, is it?

This past weekend, we stayed in the house for the second time, and I walked around in disbelief that this place is really ours. I absolutely love it. Mauve formica and all. 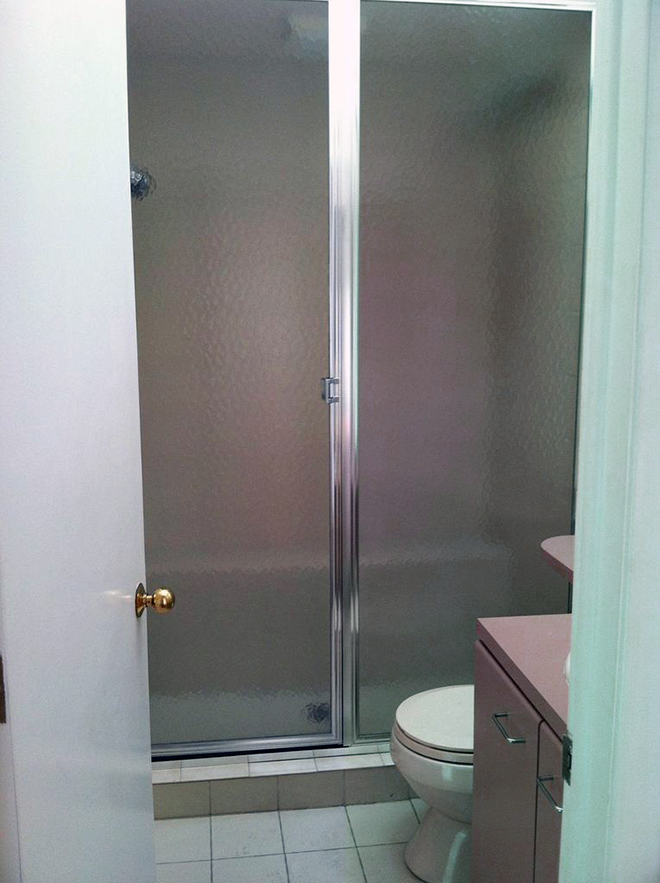 The lack of clutter is so refreshing, I almost don’t want to furnish it. Saturday night, Mike went out on a late night grocery run while I stayed home with the girls. They were supposed to be in bed but they wanted to stay up and wait for Daddy to pull into the driveway. Their window looks out over the garage. It’s amazing to see Mazzy and Harlow experience the simple pleasures of growing up in a house for the first time. My room growing up was over the garage too. I can still remember the sound of my dad driving up while I was supposed to be asleep and listening to the churn of the automatic door, just like it was yesterday.

It was probably a few years before 1987.

Right before that nasty couple built our dream home. The Good, the Bad and the Disturbing at a Two Year Old’s Birthday Party What Would The Paparazzi Do? Ruth Becomes a US Citizen

59 responses to “We Bought a House: The Inside Edition”