Sleep Training DAY ONE (with two kids in one room) If you've been following along on facebook, you know it took Harlow one hour and 52 minutes to fall asleep last night. The last hour was quiet with occasional crying. Also, if you ever wondered about the empathy of a preschooler, let me be the first to tell you— THEY HAVE NONE. Mazzy fell asleep within the first twenty minutes and slept through the WHOLE DAMN THING.

Kind of makes me feel silly for thinking I was putting off sleep training for Mazzy's benefit.

As I mentioned yesterday, I've been working with a sleep consultant named Erin. She's the same one who put Mazzy through Toddler Sleep Rehab when she transitioned to her big girl bed about a year ago. The goal is to sleep train our nine-month-old, while our three-year-old sleeps in the same room.

Typically, Mazzy talks and sings herself to sleep for at least an hour every night, so up until now, we have been putting Mazzy to bed at around 7:15pm and then rocking (a very resistant) Harlow to sleep in another room. When they are both completely passed out (Mazzy in her bed and Harlow in my arms), then I lay Harlow down in her crib in the same room as her sister. If Harlow is not fully asleep and wakes back up when I lay her down, I pick her up and rock her again. If we are lucky, this all ends at around 8:30pm.

Erin threw out our whole routine and created a new one where both girls would be put to bed at once. (What?! IMPOSSIBLE!)

I'm going to give you the basic principles behind Erin's plan (so you can play along at home), but please remember that this was specifically designed for me. Every family and situation is different.

The Plan: Erin advised us to make bedtime between 6-6:30pm for both girls. She says that if the girls are having trouble falling asleep, it is because we missed the window of their biological sleep clock and are putting them down too late. She also recommended losing Mazzy's nap since it will get messed up come September when she starts an afternoon preschool program. The early bedtime will help her make up the missed sleep. Additionally, since sleep training will be met with protest, the early bedtime insures they will still fall asleep at a reasonable hour.

In Practice: 6-6:30pm is crazy early for two full-time working parents but I vowed to make it work. This meant Mike and I had to leave work early to make sure we had some play time before sending them to bed. Erin says that once the girls catch up on sleep, it might be possible to shift bedtime back a little bit. Mazzy protested bedtime as usual but didn't seem to register the earlier time. Harlow started showing sleepy cues (rubbing her eyes, pulling her ears) at exactly 6pm— something I didn't register previously because that is typically when I walk in the door from work.

The Plan: Erin said I needed to get Mazzy on board but not to make a big deal out of it. Tell her that we are teaching Harlow to go to sleep by herself, that Harlow might cry but Mazzy shouldn't be worried and that Mommy will check on her every ten minutes to make sure she is okay. She said I could offer Mazzy a prize if she stayed in bed without bothering us or Harlow throughout the night.

In Practice: Much to my surprise, Mazzy totally got it. I think she even felt like she was my co-conspirator in this whole thing. She quietly read in her bed while Harlow was crying, came out once to get her blankie because I forgot to give it to her and then passed out after twenty minutes time— further proof that the earlier bed time was a good idea. I didn't even have to bring up the option of a prize.

PUT BOTH KIDS TO BED AT THE SAME TIME

The Plan: Erin says it's important to have the girls go to bed at the same time since they will be sharing a room for the foreseeable future and this will help establish a long term routine. Also, if you wait to put one child to bed and she is overtired, you risk disrupting the other's sleep.

In Practice: Putting the girls to bed at once seemed like the hardest part (I made Erin clarify twenty times) but now that I've done it, I'm not sure why this was such a foreign concept. Mazzy was excited to go to bed at the same time as Harlow. Once she was in bed, she was actually quieter and more well behaved knowing that her baby sister was in the room. Also, I can totally see that once this routine is established, putting both kids to bed at once is way easier on the parents.

The Plan: Leading up to bedtime, I should change Harlow's diaper, put her in footed pajamas, and nurse or feed her a bottle. Then I should take everyone in the nursery and read them both a book. After the book, I should give Harlow one last kiss, put her in the crib, rub her blankie on her cheek, and walk out.

In Practice: Mike and I split up to get the kids ready for bed. He went with Mazzy to brush her teeth and change her into her pajamas while I changed and nursed Harlow. Then Mike held Harlow while Mazzy sat in my lap and I read everyone a book. Mazzy tried to stall by saying she didn't like the book options but eventually I got her to agree to one. Then she said she didn't want to go to bed but I made it clear she had no choice. After the book, Mazzy got in bed and I told her three things I love about her plus three jokes (as per our tradition). Then I picked up Harlow for one last snuggle, gave her a kiss, placed her in the crib, put the pacifier in her mouth, rubbed her blankie on her cheek and walked out as she immediately started wailing behind me.

That's when I sent Mike out to take a walk around the neighborhood. He's a tough guy except when his girls are crying.

In Practice: The first ten minutes of crying was agonizing. I was relieved when the first check-in came. I knew Harlow would drop her pacifier outside of the crib so I was armed with replacement pacifiers if they weren't easy to find. When I walked in, Harlow was, as always, standing at the edge of the crib in the spot closest to the door. She did not leave that spot for the next hour and a half. At the beginning, Mazzy was still up, so I acknowledged that she was doing a good job. By the third check-in, Mazzy was passed out despite Harlow's wailing. After about the fourth check-in, I noticed that Harlow had stopped dropping the pacifier and now understood it was in her best interest to keep that thing in her mouth. I also noticed that Harlow had pooped in her diaper, so I picked her up and changed her without saying anything and then placed her back in her crib.

At 57 minutes, Harlow stopped crying. I waited a good ten minutes and then made the mistake of peeking inside. Harlow was still standing up in the same spot but had just opted for silence. She's a smart one because it totally worked. I quickly backed out and she started crying again. For the next hour, she was quiet with occasional whimpers.

At 8:22, Harlow finally stopped for good. Which, it should be noted, is about ten minutes before she usually falls asleep when we rock her.

WAKING IN THE MIDDLE OF THE NIGHT

The Plan: Same as how I put her to bed. Walk in, replace pacifier, rub blankie on her cheek, walk back out. Repeat as many times as necessary.

In Practice: Will let you know! As of this moment, she has yet to wake up.

Tomorrow I will continue Erin's sleep plan with the new morning routine, naptime and what happens on DAY TWO.

NOTE: Please follow my lead and ignore the people making negative comments on my facebook page. Life is so much happier if you DON'T FEED THE TROLLS. Back to School with Mini Boden 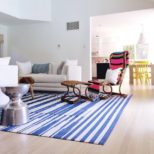 Summer House Living Room: Before & After