I Want a Baby Breakdown Yesterday was a shitty day. It wasn't that anything horrible happened. It was just that I spent the whole day with an unexplained lump in my throat that felt like, at any moment, it could travel upwards, liquify, and then burst out of my eyes.

I might have felt sad because yesterday, after ten months of breastfeeding, I had to give the baby her first bottle of formula. Or maybe it was because I had unusually low traffic yesterday and it felt like you guys had gotten sick of me. Or it could've been because I finally saw last season's finale of Dexter and I. Did. Not. See. That. Coming. Most likely, it was a combination of all three coupled with a general sadness that is known to show up every once in awhile. In any case, I was uncharacteristically glum.

Mazzy, it turned out, felt the same. Usually, she is nothing but sunshine and smiles (that's a gross exaggeration but just go with it) but yesterday something was off. It could've been because of the two little baby teeth finally cutting through her bottom gums. Or maybe it was because she doesn't like that fall weather dictates having to wear a hat and sweater. Or it could've been the horrible realization that the rubber ducky with the pirate hat (she loves that thing so much that it has made it's way out of the bath and into the diaper bag) is indeed missing. But I suspect that like me, she was unhappy just for unhappiness's sake.

The only difference between whatever she was going through and whatever I was going through was that the second she's upset, uncomfortable, or unfamiliar she's allowed to reach into the bottom of her very existence, dig up any and all bad feelings that she may find and then scream her head off and let the tears flow. And to add insult to injury, do you know what she gets in return? Someone runs to her, scoops her up and holds her as tightly as possible. She gets her favorite song sung softly in her ear while simultaneously getting her back rubbed. This goes on for as long as it takes for her to relax, take a breath and realize that she can learn to love her other rubber ducky even if it's minus a very chewable pirate hat.

I must say, that all sounds fantastic. So if I ever let myself have a real live baby breakdown, and you happen to be standing nearby, please do me a solid and pretend you're my mom.

(Also- does anybody else watch Dexter? Because that ending was seriously devastating!) 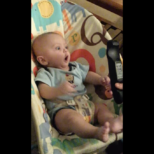 Baby Falls Hopelessly in Love with Remote at First Sight “The Gift Of Awkwardness” Keeps On Giving 21 Gingerbread Houses Only Hollywood Could Have Built

8 responses to “I Want a Baby Breakdown”