Abandoning the Rules and Saying Yes to Everything Like many parents, I started out the quarantine with high hopes of keeping our family on a consistent schedule, managing the kids’ learning, and trying to thrive through this unbelievably bizarre time. Now that the pandemic has been going on for three full months, my plans seem to have shifted to survival mode. What does survival mode entail exactly? Welp. I’ve realized that one way to make this time easier for everyone is to give the kids what they want.

For starters, we have relaxed the rules A LOT. Bedtime is later, dessert is every night, and obviously, more screen time is a given. Mazzy and I have a running joke where she comes up to me to say “I love you,” but we both know, she is really there so that I can input her iPad passcode for additional time. I like to stall as long as possible and make her come out and say it. “Is there anything else you want, Mazzy?” I ask, my words dripping in sarcasm, after a full five minutes of hugs and kisses. “Ummmm….oh…yeah. There is just one more thing…”

In addition to spending more time watching shows and playing individual games, I let Mazzy join TikTok and I’ve been letting her game with her friends online, which were both totally forbidden in “the before times.” I thought being on a server was dangerous, social media was for teenagers and Roblox was a waste of time. Now, online gaming seems like a great way for Mazzy to have regular play dates with her friends. And since we have her computer set up in the living room, I can see what she is playing and hear her interacting with her friends. It all seems pretty harmless. After much hemming and hawing, we also let her download Animal Crossing on her Nintendo Switch and that seems harmless too. I don’t know what I thought it was going to be, but so far it seems to consist of virtual gardening and dressmaking.

I am also saying “yes” to online shopping requests that I would have previously ignored or waited for a special occasion. For instance, I let her buy her first outfit from SHEIN (she’s worn it every day since she got it), I bought her a TikTok sweatshirt that she wanted, and when she told me she wanted to cut bangs, I bought her “bang extensions” so she could test them out first. It was a good exercise because she ultimately decided they were not for her. (The extensions successfully squashed my fringe dreams too).

I also let Mazzy buy LED lights to hang in her room. At first, I said “no” because I didn’t really want to turn Mazzy and Harlow’s newly renovated attic room into a nightclub, but she kept begging me. After two months in quarantine, I thought Mazzy deserved an unexpected bit of happiness. The smile on her face when she received that box in the mail was worth its weight in gold. I also fully appreciated the father daughter bonding moment when they hung the lights together in her room. And the fact that the kids are really excited to go to bed now because then they get to play with their bedroom light show? That is a complete bonus.

As for Harlow, she is now eating the junkiest cereals imaginable for breakfast. We used to call sugary cereals “vacation cereals” because the only time the kids were allowed to eat them was when they were available at a hotel breakfast buffet. That’s why Harlow calls Frosted Flakes “Zucaritas,” because she was introduced to them in Mexico and was never allowed to eat them at home. We’ve now got a Costco sized box of Zucaritas in our kitchen. We’ve got Lucky Charms and Golden Grahams too.

Is eating sugary cereals for breakfast going to cause irreparable harm? I don’t think so.

Is letting Harlow watch movies and TV shows that have age recommendations higher than her older sister going to impact the trajectory of her life? I don’t think so either. We’ve even let the both of them watch Saturday Night Live the next morning and just quickly fast forward when a subject matter gets a little dicey.

The kids eat meals on the couch now (or sometimes in picnics on the floor), we let them stay up to watch Survivor a full hour after bedtime on a weeknight and they serve themselves snacks and desserts now, which means a scoop of ice cream is way larger than what we used to give them. Then they crush an Oreo or pour sprinkles on top. And Mike got all the ingredients for Shirley Temples so Mazzy can make herself one to go with dinner. It’s all good.

On the other side of the equation, Mazzy and Harlow are diligent about getting all their school work done and show up on time for their zoom classes. They sit down for family dinner every single night, play outside more than ever before, have been taking a more active role in cleaning up the house, and even clean up after the dog sometimes.

Oh yeah, the dog. She’s an example of saying “yes” in quarantine too. I almost forgot to include her because she feels like a gift to me too.

So yes, we are saying “yes” a lot. But I don’t think it makes me nearly as much of a sucker as I used to think it made me. The rules inside the house have relaxed a lot, but that’s because the rules outside the house are way, way stricter.

The kids seem alright. And that’s what matters to me most. Rebranding Myself As ‘Mommy’ 6 responses to “Abandoning the Rules and Saying Yes to Everything” 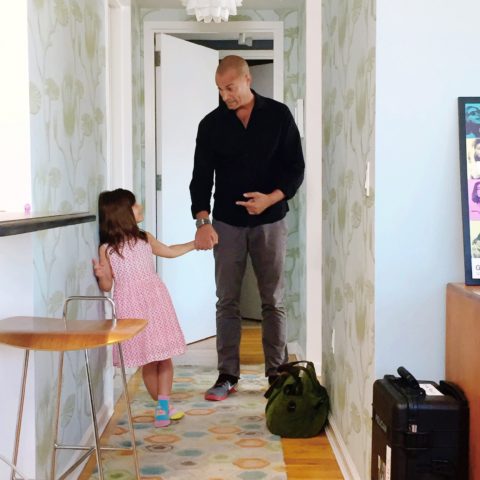