Mazzy and Harlow were excited to see “Hair Love” win the Oscar for Best Animated Short on Sunday night because it was one of the few movies nominated that they had seen. It was the short that aired before Little Women. On the surface, it’s about a dad who is faced with doing his daughter’s hair while her mom is in the hospital. Mazzy and Harlow actually made fun of Mike after watching it, because he is TERRIBLE at doing their hair.

Matthew Cherry was the writer and director, and after watching his Oscar acceptance speech, I now realize that “Hair Love” is about way more than that.

“Hair Love was done because we wanted to see more representation in animation,” Cherry said. “We wanted to normalize black hair. There’s a very important issue that’s out there, the CROWN Act, and if we can help to get this passed in all 50 states, it will help stories like DeAndre Arnold’s — who is our special guest tonight — stop happening.”

After the speech, Mazzy asked, “What’s the Crown Act?” I didn’t know, so we looked it up. Turns out CROWN stands for Create a Respectful and Open World for Natural Hair, which is legislation they are hoping to pass to explicitly ban discrimination based on race-related hair textures and styles. DeAndre Arnold, who Matthew Cherry and co-producer Karen Rupert Toliver took to the Oscars, is a high school senior from Texas who was required to cut his dreadlocks to walk out at his graduation.

Thank you for the film and the education, Matthew Cherry! You now have a bunch of Jewish girls from New York who support your cause.

If you haven’t seen Hair Love yet, you can watch the full 6 minute short below! 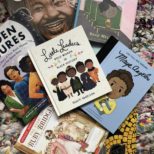