It didn’t win any Oscars except Best Costume Design, but Little Women remains one of my family’s favorite movies of the year. I finally took Mazzy and Harlow to see it two weeks ago and we all loved it, although Harlow did have some confusion about past and present. For instance, at one point, she thought Beth had suddenly come back to life. She was also mad that Mazzy kept covering her eyes whenever there was a kissing scene.

While we were watching the movie, I realized that as a kid, I had a graphic novel version that went along with audio on a record. I listened to it over and over on my Snoopy record player. I hadn’t thought of that in years, and since I knew I hadn’t read the full book or seen the previous movies, I was initially confused as to why I was familiar with so many small details in the story. It felt a bit like unlocking a piece of my childhood. I remember always having a hard time picking my favorite character because I wanted a career, love and money. Don’t we all???

Mazzy said that Amy was her favorite because of “all the crazy things she did when she was younger” but was confused as to why Jo got married at the end. I told her that we don’t really know if she got married or if the marriage was just something that she had to write to end her book the way the publisher wanted. She asked me how the real book ended so I looked it up. Turns out, the book ended with Jo married but that’s not how Louisa May Alcott wanted it to end. The character of Jo was based on her life and Alcott never married (preferring to live life as a ‘literary spinster’), so I guess that’s the real ending.

Mazzy ended up finding a graphic novel version at her school library with a modernized version of the story. She told me that Jo realized she was gay in the end. Mazzy wasn’t satisfied with that ending either. I think as of right now, Mazzy wants to believe as Jo did in the movie, that a woman can feel full and accomplished all on her own and that her life does not have to be defined by whether or not she falls in love.

Did you take your kids to see Little Women? What did they think? Will My Girls Be “Rebel Girls” One Day? 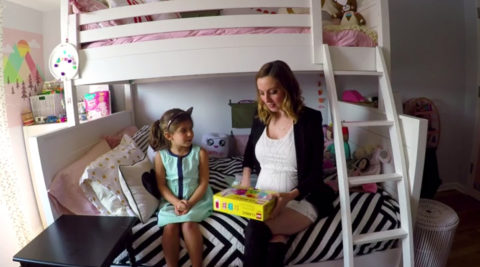