I remember the first time I met my stepfather Sam. He picked me and my mom up in a car and we drove somewhere. I don’t remember where. What I remember is a sign that said, “Bear to the Right”.

Sam shrieked. “THERE’S A BEAR TO THE RIGHT?!” Then he pretended to veer the car in the opposite direction before smiling and bearing right, as instructed.

I hid my smile behind teenage angst and apathy. Which means, my eyes rolled so far back in my head, I almost passed out.

That my friends is a “Dad Joke” and I have come to know them well over the years. My stepdad either enjoys the collective groan that emanates from his unwitting audience after each poorly told joke or he just can’t help himself from trying for gold again.

There are three kinds of dad jokes:

1) Taking things too literally (i.e., the bear to the right)

Sam was a big fan of Jerry Steinfeld, Andrew Barrymore and Brad Pitts.

“Oh, right. Brad Pitt,” he’d say as if it was all an accident and not a misguided stand-up routine.

This weekend, Mike made two such dad jokes, both puns. I can’t remember what they were exactly but each one made me worry about our future. I don’t remember Mike ever using a pun since I’ve known him so I’m not sure what is happening. How many years does fatherhood need to set in before dad humor emerges? Is five years the gestation period?

Mike hung his head. He had heard himself too.

“I’m a dad,” he said quietly into his hands, admitting his shortcoming and forgiving himself both at once.

Why did I tell this whole story?

Ah, yes! It was the set-up for a video of a literal dad joke I saw on Jezebel, which all started when one poor little girl asked for a Frozen doll for Christmas.

I like to think he gave her the real thing after he stopped filming. Otherwise, that’s not a dad joke. That’s just cruel! Santa, Bring Me Some Sister Wives 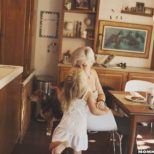