What Happens to a Man’s Brain After Having Two Daughters? I want to preface this post by saying, all dads and daughters are not the same. I'm fearing a backlash before I even begin wiriting. "This is so stereotypical!" Yes, I know. But my husband happens to be a total alpha male and my daughters (even the little one) happen to be really really really into princesses and pink right now.

I guess my family is filled with stereotypes.

And just so you know I'm not exaggerating, Mazzy saw my drawing and asked if the shapes towards the back of the guy's neck were an Elsa braid.

When Mike thought about having kids, I know he didn't think about how much time he would dedicate to untangling hair and switching tiny doll dresses on demand. This diagram represents the parts of my husband's brain that were never utilized until he had daughters.

1. Princess Movies Memorization Cortex: This is the part of the brain that allows Mike to remember the difference between Aurora and Rapunzel. It also allows him to connect each character with a particular prince and storyline, even if he's never seen the movies. Ariel is the mermaid, Tiana kisses the frog and so forth. Most importantly, when Mazzy requests the Anna costume, Mike knows to bring her the one with the pink cape as opposed to the blue sequined one. That could cause tears.

2. Sports Encouragement Gland: This is a very important part of the brain where Mike is sinking all of his energy. He has had Mazzy enrolled in Super Soccer Stars for three years and is just waiting for the right moment to teach her the difference between a driver and a putter. It is also the reason Mike bought both Mazzy and Harlow their own Giants t-shirts— if they can't play football, they are at least going to be really invested in Mike's favorite team.

3. Hairdo Request Panic Center: This is the alarm that goes off when Mazzy asks Daddy to do her hair. It tells him "I can't do this. Defer to Mommy." If Mommy is not available, this part of the brain tells him clipping a bow on the side of her head (preferably higher than her ear) is easier than making a french braid. It can also summon up brain power from other regions in the event a ponytail is required, but is not quite sophisticated enough to create one without lots of lumps and screaming.

4. Soft Spot: Whether it be putting off bedtime, asking for ice cream or wanting to watch "just one more show", the soft spot can weaken a man's stance and hinder the ability to say "no". While the Soft Spot is a welcome addition to Mike's typically grouchy demeanor, it can also be the source of parental dispute. "You let her eat WHAT?!"

5. All Things Must Be Pink Reminder Lobe: This part of the brain functions as a constant reminder to cancel out all blue, yellow and green options and only see one thing— PINK. Yes, Mike knows we have a box of multi-colored straws but when he pulls the box out during "Smoothie Time", this lobe guarantees he chooses the ONLY real color available. Ditto for clothing options, especially underwear. Mike knows better than to suggest Mazzy wear her Belle underpants. They might be princess themed but they are YELLOW.

6. Dating Denial Zone: What? My one-year-old and four-year-old daughters will date boys one day? No, they won't. Not happening. That's RIDICULOUS.

7. Doll Shoe Locator Stem: This seemingly inconsequential brain function can actually stave off the largest emergencies to ever befall a four-year-old girl. Mike's razor sharp Locator Stem not only knows doll shoes usually reside on the top of the bookshelf where Harlow can not reach them, it also knows that when Mazzy loses one, it is most likely hidden in the couch. If the Locator Stem fails and a shoe is lost forever, this area of the brain knows to summon the "Soft Spot" to create a distraction. "Anyone want ice cream???"

8. Black Hole: The small empty space that resides between the top quadrants of the brain is commonly referred to as the "I Really Wanted a Son Repression Nodule". It starts out really large, totally overwhelming all other areas of the brain so it can barely function as one cohesive organ. Thankfully, as the years progress, it gets smaller and smaller until the man totally forgets it was ever there.

What "dad of daughters" brain functions am I forgetting? If Mazzy and Harlow had Superhero Alter Egos 14 responses to “What Happens to a Man’s Brain After Having Two Daughters?” 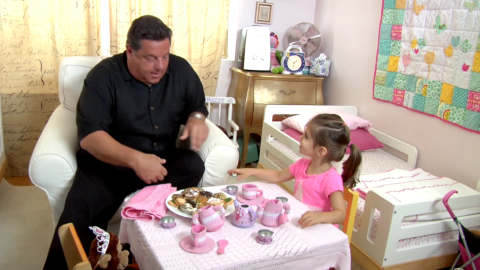