This month, Mike and I had our third date using HowAboutWe. My original plan was to do something intimate and casual like Pancakes at Clinton Street Bakery, a drawing class at the Met or "Freaks and Geeks" Bingo Night at Videology (FYI, that's what I say every month), but then I got an alert for tickets to a dinner at the James Beard House.

If you are a HowAboutWe member, they send alerts for some of their more exciting date offerings when they become available. I remember when I first joined, there were tickets available for a Jay-Z concert but I didn't act fast enough and missed them.

This time, I bought tickets before even asking Mike if he wanted to go. I knew he'd want to go. The man spends an unhealthy amount of time watching various food competitions on TV; the kind of shows where James Beard credentials are thrown around on the regular.

Besides giving out prestigious awards for celebrity level chefs, the James Beard House throws dinners where they invite an up and coming chef to cook a meal for their guests. On this particular night, the chef was Andrew Whitcomb from Colonie and the dinner was called "EAT Brooklyn".

No, we weren't expected to lick the bike path on the Brooklyn Bridge or eat discarded cigarette butts off the sidewalk outside a random bar in Williamsburg. Whitcomb makes sure his ingredients are sourced from as many local Brooklyn purveyors as possible. The meal started with cocktails and passed hors d'oeuvres in the reception room. Remember our first date, when I said we were the two oldest people in the place? The James Beard House was much more our speed. Or, at least our age group. It was pretty schmancy for a mom and dad on a random night off! Perhaps the best thing I have ever eaten in my life. And since I was already married to my date, I could inhale those hot doughnuts like the hot doughnut inhaling machine I was always destined to be.

We had so much fun at the dinner, I looked up the James Beard site when I got home and found out we could purchase tickets to dinners there any time. We just never would have known that was something we had access to if it wasn't for HowAboutWe suggesting it as a date option. Plus, the discounted rate makes it much easier to swallow.

It really is amazing how many fun things there are to do in New York City that we never think about doing together— tango classes, graffiti tours, live music, photo safaris in Central Park.

Outsiders and tourists all know this, but locals spend just as much time watching TV on their couch as people from any other part of the country.

This was the last sponsored post I contracted with HowAboutWe but I think the true testament of the service is that Mike and I plan to continue using it. I knew it would be fun when we first started, but I had no idea just how valuable it would be for our relationship.

Having a running list of various date ideas is a huge motivator to getting a sitter, getting out of the house, and doing some stuff on our own as a couple.

It's nice to build a few memories that don't involve the kids.

BUT, if you still need motivation to get started, you can click here to get $50 towards your first date. Consider that savings a donation into your babysitter fund.

For our next date, I've got my eye on a BYOB pottery class.

Except with other people in the class.

But still something different, kinda romantic and lots of fun.

HowAboutWe for Couples is now in NYC, San Francisco, Chicago, Seattle, and Los Angeles! If you don’t live in any of those cities, no worries. You can still sign up and they’ll email you once they’re in your area. 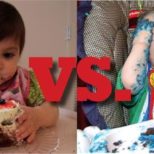 6 responses to “Our Third Date”