What is it with miniature food? It all started with eggs. For some reason, Mazzy adopted this food as her personal mascot. She makes her friends call her Mr. Egg and even had it embroidered on her binder this year. I’ve never seen her so happy as when that thing arrived in the mail. Well, I guess that’s not entirely accurate. She was equally as happy as when she got her egg-themed backpack.

Mazzy also got a hankering for avocados. No, she won’t eat avocados. She just likes to draw them half open and smiling. She also likes to animate avocados on Scratch. One such Mazzy feature was about the brutal murder of an avocado, which seemed pretty worrisome, until that murdered avocado became avocado toast. Cue evil digitized laugh. That little animation caught me so off guard, I laughed out loud for a full five minutes.

Then, in Mazzy’s stop motion animation class over the summer, she started making miniature foods with clay. Every day she would come home with tiny clay bananas, hamburgers and cupcakes. My favorites were the layer cake that when cut open revealed a rainbow middle and the plastic baggie full of chocolate chip cookies. She used actual plastic to make that one! The miniature foods were so special to Mazzy, she asked for a permanent safe space for them. We settled on a drawer in my jewelry box, which is where they now reside. Her collection of self-created miniature clay foods is constantly growing, so much so that I might need to find a new place for my jewelry.

Then, this summer, I got a very exciting package in the mail. It was from Shopkins, which Mazzy and Harlow already love, but this package was filled with their new line of Real Littles. It features real life packages in miniature sizes of real food brands, like Pringles, Pop Tarts, Heinz Ketchup, Eggo Waffles, Welch’s and Chef Boyardee. Inside each package is a miniature food Shopkin. Basically, just like Mazzy’s mini foods except with a face. Mazzy and Harlow both fell in love. Except, just like a kid who plays guitar might claim that music is their thing or a kid who plays soccer might claim that sports are their thing, and want to deny their sibling their right to do the same, Mazzy claimed that “miniature foods” were her thing and became very territorial. I told her she had to share with Harlow. We had to work out a selection system (like how captains pick their teams in gym class) to get all the Real Littles sorted to their respective owners. It was a very competitive process, with lots of drama, trading and strategy involved. Then once all the selecting was done, they were allowed to negotiate trades. It was a very lengthy, dramatic process. Mazzy ended up getting Cherry Pop Tarts, Welch’s Grape Jelly and Hunt’s Tomato Sauce. Harlow ended up with the Eggo Waffles, Reddi Whip and Rice Krispie Treats. Why some were more desirable than others, who knows, but in the end, they both seemed very satisfied with their teams. I, for one, was impressed there wasn’t more fighting over this little bag of cereal. Those rainbow loops shake around in there! They played store and restaurant and then decided to use them as foods for their dolls, which made play time with Shopkins go on for way longer than I’ve seen them play with any single toy for quite some time. I thought that after the initial newness wore off, they’d end up being more a Harlow toy than a Mazzy toy. It is getting increasingly hard for toys to appeal to Mazzy. I mean, tell me this is not impressive: She made a hotdog, a pat of butter and a ravioli. Then she put them all inside my jewelry box, where they are almost indistinguishable from each other. Can you tell the Real Littles from Mazzy’s miniatures??? 11 Things that Happened in September 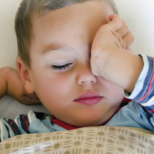 You Should’ve Asked for a Baby Mop For Christmas