We are currently on spring break in Lake Tahoe! We are visiting my stepbrother, Eric and his family who are here on a six month sabbatical. Eric and his wife, Tami both started as professors at the same university at the same time (Eric teaches evolution and Tami teaches environmental studies), so they were able to take their sabbatical together. They moved their family out to Lake Tahoe for the six months, put their kids in school and are doing a bunch of writing and research. It was the perfect excuse for us to go somewhere new for spring break!

That’s their kids Hunter (11) and Maia (10) in the photo up top, and my kids are so excited to spend their vacation with them. Hunter wants me to tell you that his nickname for Harlow is “Armrest.”

Also, these crazy tall trees are the only things making my kids look small these days!!! When I started posting about my trip on Instagram, a lot of people were surprised to learn that I have a stepbrother. I actually have two— Eric and David. They are my stepdad Sam’s kids and yes, I know, I don’t talk about them that often. That’s because we typically only see each other once or twice a year. Someone on facebook asked why people even use the term “step” or “half,” why can’t people just say brothers and sisters?

I guess every family is different and can choose to call their family members what they like. For us, stepbrothers and stepsisters seems appropriate. I met my stepbrothers when I was fifteen and they didn’t officially become family until I was in college. We never lived in the same house and they spent most of the holidays with their mother, but we did go on a lot of family vacations together as teenagers. Most of those vacations were ski vacations. In fact, my stepfather proposed to my mom on a family ski trip in front of all of us.

Skiing is something my family did together since I was three years old and my parents were still married. We were part of a group of families that got a weekend share house together in upstate New York. As the years went by and all the kids improved, we upgraded to a weekend share house in Vermont. Then my parents got divorced and we weren’t able to go skiing as often. When we did ski, we would go with my mom, who had to stay with my little sister on the slopes, who was not nearly as advanced as I was. Funny that we took so many ski trips together and I actually don’t have any memory of skiing with my mom. I skied with my dad, and then I skied with the other families on the trip when my dad was no longer there, and then I skied on my own.

Most of my memories of skiing when I was 13-16 years-old are by myself, which is a little crazy to think about, considering there were no mobile phones at the time! I loved skiing on my own though, because then I could ski whatever I wanted (moguls mostly) and as fast as I wanted. I think that’s how I got really good at it.

And then, when my mom met Sam, my stepbrothers were introduced into our ski vacations, and Eric and I found that we were pretty well-matched. Suddenly, I had a ski buddy again. My younger stepbrother David, at least at the time, was not as good a skier, but he was the risk taker, so Eric and I used to follow him on to the most ridiculous slopes and cliffs to make sure he didn’t kill himself. Looking back, I can’t believe some of the situations that David got us into. I always love a challenge, though.

At a certain point, our parents stopped organizing our ski trips. They were getting older (my mom couldn’t ski with her back and Sam couldn’t ski with his knees) and they planned a family trip to Costa Rica instead. That was our last big family trip together. I think it just got too expensive, and it was tough to organize so many competing personalities. All my sister wanted to do was lie on the beach, Eric and David wanted to go on hikes and look for animals, and I just wanted to eat at a good restaurant. Put us all in a van, driving for hours at a time on very bad roads on the side of a cliff, and well. It was experience. A few years later, we all started our own families, and that made travel all together pretty impossible.

I hadn’t skied with my stepbrother Eric in over 20 years, until this vacation. In fact, this is the first time we have ever gotten together intentionally, absent of our parents. The reason we made the trip has a lot to do with our kids, who do not distinguish between cousins and step-cousins. They are just cousins, and even though they only see each other once or twice a year, they get along like no time has passed. Mazzy and Harlow talk about Hunter and Maia all the time, and ask when we can see them next. When we told them that we would be staying with them for a few days on our trip, they were beyond excited. In addition to watching our kids continue to bond on this trip, it’s been really nice spending time with Eric and Tami. We used to have so much fun together as teenagers, before we all went in different directions and started leading separate lives. After college, Eric joined the Peace Corps and was stationed in Uganda (where he met Tami) and I moved to Manhattan and went into advertising, which was not nearly as noble. Then Eric and Tami traveled around on different research projects before settling in Virginia. They are definitely not city people.

Yesterday at lunch, after a morning of skiing all together, Eric reminded me of the Alpine Tree Posse, a group of kids we made friends with on a ski trip to Vail, who all put a tree branch in their boot and loved skiing seemingly impossible routes through the trees. I had forgotten all about that. We skied with them for three straight days and having that added challenge totally reignited my love of skiing. I still love skiing through the trees today.

I’ve thought so much about my time skiing with my stepbrothers over the last few days, from my late teens to my early 20s, on family vacations I had largely forgotten. I can’t really explain how much joy it brings me to see our kids ski together, all these years later. Perfectly matched on the slopes, just like we were. Skiing in an organized line, down the mountain, just like the families I skied with as a kid, when my mom was skiing the easier trails with my sister. Today, we are moving on to the next leg of our trip. Last night at dinner, the kids exchanged email addresses so that they can continue to communicate with each other once we get home, without our help. Not because their parents are forcing them to hang out, but because they want to. They’ve got private jokes now and tons to talk about. Unlike Eric and I, they’ve been family since they were born and have a lifetime to get closer. And I’m hoping their relationship will make my step-relationships closer as well. 27 Fun Things Families Have Done to Shake Things Up 2yo Girl Nails the Bottle Flip Craze on her Second Try

5 responses to “Skiing with my Stepbrother, Twenty Years Later” 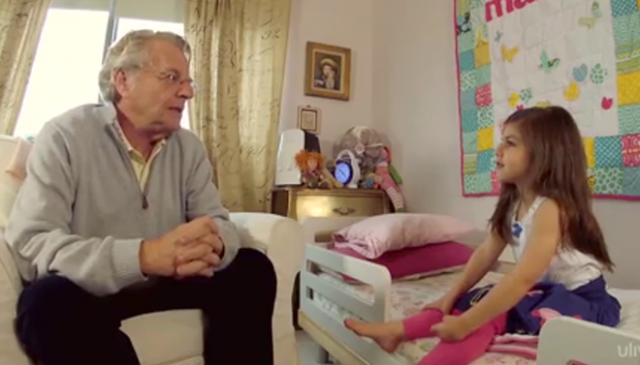