During the blizzard, we were hanging out at my friend Seri’s apartment. When it started snowing really hard, Luke (aka Harlow’s boyfriend) said he was going to go outside. Harlow lost it on him because a) he wasn’t wearing a jacket and b) he didn’t have a grown-up.

I captured most of it on video (when I wasn’t laughing my ass off) and you can watch the two of them argue like an old married couple below. I know I’ve talked about “the wrath of Harlow” before but now you get to see it in action!

Poor Luke tries to stand his ground while also trying not to make Harlow more angry. I think we’ve all been there.

Also, I just want to say that whenever I watch a video of a toddler screaming like a grown-up, I assume (as do most of the commenters), that this behavior is directly lifted from the mother. I SWEAR ON MY LIFE, I never sound like this. I do yell at my kids sometimes but not nearly with the authority that Harlow does it!

I should take a lesson.

After the argument was over, Harlow and Luke did what every married couple does. They sat together on the couch, watched a show and tabled their resentment for another time. Mazzy Steals My Heart at My Book Launch Party 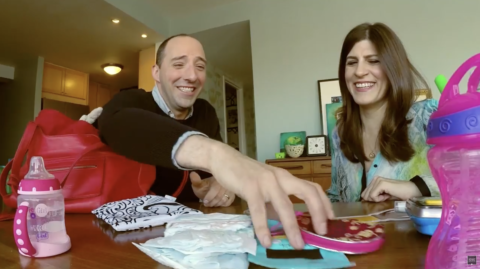