On Friday, I wrote about a $3000 stroller from Aston Martin, thinking it must be the most expensive stroller ever made. Then someone pointed me to The Roddler which sells for the low low price of $4495.

The next obscenely priced stroller better be made by Spacely Sprockets, because unless it hovers above the ground, I don't want to hear about it.

Back when Mazzy was born, in the olden days of December 2009, the most expensive stroller you could buy was a $1000 Bugaboo Cameleon

. Someone I know had to have one. Below is a cautionary tale of a new mom who cared way too much about the brand name of her baby's wheels.

I'm not supposed to tell this story. In fact, I haven't breathed a word of it till now. It didn't happen to us, anyway. That would be embarrassing. No, it happened to another couple we know. Their names are Schilana and Schmike.

Schilana and Schmike live in New York City. In New York City, if you have a baby, you most likely have a Bugaboo Stroller. As the Mercedes of baby strollers, it is priced at approximately $1000.

But Schilana wanted a Bugaboo very badly. Not only was she told they were the best strollers for handling rough city terrain, but they came in cool colors and all her friends had them. Schmike, on the other hand, thought paying $1000 for a stroller was obscene. But when Schilana sets her mind on attaining something she deems necessary, especially if it is for the good of their brand new baby, it is next to impossible to sway her.

Schilana was not entirely unreasonable though. When she found out some of her friends had bought used Bugaboos on Craig's List, she decided to check it out. She ended up doing one better.

Schilana found a woman who had three brand new Bugaboos, one even in the color she was coveting. The woman said that her boyfriend worked for a company where they sold overstock. All the Bugaboos were in their original box, packed with the instruction manual and the user DVD, and cost $600. Schilana, feeling bolder than usual, suggested $500. They settled on $550. Schmike would be so pleased!

When Schilana told Schmike about her arrangement, Schmike loved her just a little bit more that day. They arranged to meet the woman that weekend at her apartment uptown. Schilana asked for her apartment number. The woman said she would meet them with the stroller in the lobby. Which was understandable. Why give strangers your apartment number if it wasn't neccessary?

When Schilana and Schmike arrived at the building, there was no one in the lobby. They waited. The woman arrived by walking in the front door and lugging the box inside. Which was odd. But then she explained that since their apartment was small, they kept the strollers in their car. Okay, that made sense. New York City apartments ARE small.

Being a smart guy, Schmike wanted to check out the contents of the box before finalizing the deal. Inside, all the Bugaboo pieces appeared to be new and accounted for. Complete with the instruction manual and user DVD as advertised. Schmike handed the woman a check. She said she didn't take checks. After all, she didn't know them really. They were strangers. This was true. They WERE strangers. So Schilana waited with the woman while Schmike went to a bank to take out $550.

Then Schmike and Schilana went home, proud of their resourcefulness, their frugality, and most of all, their brand new Bugaboo!

Once home, Schmike went about the task of assembling the Bugaboo. He struggled. The fabric looked kind of funky. It was pulling in some areas and sagging in others. Schilana looked up pictures of the Bugaboo online and determined that their Bugaboo didn't look nearly as nice. Schmike said companies always make everything look perfect for their websites. Shilana agreed. Companies DO make everything look perfect for their websites.

Then the time came for Schmike and Schilana to take the baby out for a stroll. To proudly pull up their Bugaboo next to all the other Bugaboos at the playground. But as they rolled the stroller outside, the front wheel started to squeak. Huh, they thought, we should look into that. A block later, they noticed that the baby was rolling to one side of the bassinet. They rolled her back. She rolled again. The bassinet appeared to be tilted. This was obviously of great concern. They quickly retreated back to their apartment.

Schmike studied the Bugaboo but couldn't find anything that he had done wrong in putting it together so he called the Bugaboo customer service line for advice. (I'm improvising now because of course Schilana and Schmike are just friends of mine and there is no way for me to know everything word for word but…) the conversation went something like this:

"Can you please tell me the product code of the stroller?"

"Where would that be?"

"On the bottom of the frame".

"It's right in the middle on the bottom".

"I still don't see anything".

"What about the box? Is there a sticker on it?"

And then the agent said the most awful sentence in history:

"It appears you have purchased a fake Bugaboo".

Schmike and Schilana reflected. They thought about how the woman was offering three brand new strollers at half the price, how easily Schilana had bargained with her, the secretive nature of the apartment number, the trunk full of strollers parked outside the building, the rejection of the check and the subsequent trip to the bank… they thought of all this and looked at each other with eyes that said, "How did two intelligent people let a brand new baby make them do something so EARTHSHATTERINGLY STUPID???"

In the end, they salvaged the frame and bought all new Bugaboo parts. The fabric had the perfect amount of tautness, the bassinet lay flat, the wheels handled with squeakless precision, and it looked just as perfect as the Bugaboos on the company website.

Grand total for the fake bugaboo plus the real bugaboo parts? $1000.

To their friends and everyone they pass on the street, Schilana and Schmike own an $1000 Bugaboo.

For a chance to win a REAL BUGABOO CAMELEON (winner will be selected July 11th 2014), enter the Mommy Shorts giveaway here.

Epilogue: Schmike and Schilana got rid of their Schmugaboo in 2012 when they had their second kid: Schmarlow. They used a two-seater Britax B-Ready

(which was given to them as a gift from the company) until 2014 when they decided to purchase the more compact UPPAbaby Cruz. Mainly, they make Schmazzy walk while Schilana wears Schmarlow in a carrier. 31 responses to “The Schmucks & The Schmugaboo” 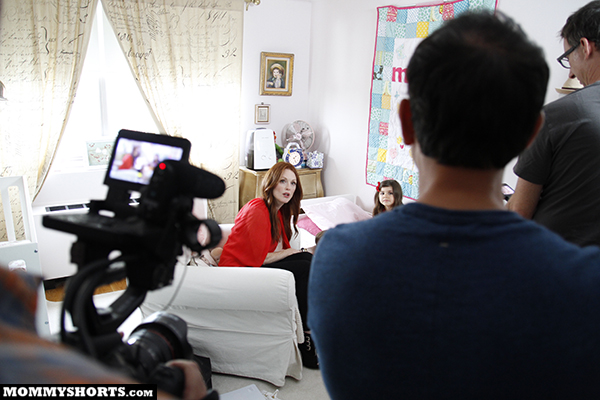