Is There a Toddler Wrangler At This Shoot? About a month ago, Mazzy's teacher emailed to ask if I could send in a family photo. Apparently, all the other kids have them hanging on the wall of the classroom (they had requested one at the beginning of the year) except my daughter.

There was one problem with answering the teacher's simple request.

WE DID NOT HAVE ONE.

We have plenty of pictures of Mazzy. Even a few of Mazzy and Mike. Maybe one or two of Mazzy and me. But none of all three of us together. Which would be why the homemade Thanksgiving card, sent home from school a few weeks later, included a picture of Mike and Mazzy together and a picture of my head glued pathetically underneath (see left).

So, I did what any good mother would do. I handed our camera to various strangers and family members in an attempt to get the perfect shot. The result? Heads cut off, eyes closed, unflattering angles and a fuzzy little blur that barely resembles a child.

I told Jenny that Mazzy is quite the handful and I didn't think she was going to stay still long enough to be photographed. Jenny said not to worry about it.

I was right. Mazzy did not stay still. Not for one second. And during the shoot, I kept thinking that Jenny's camera was not clicking nearly enough to get that one purely accidental great shot.

Well, the joke's on me because apparently, when you have the right equipment and you know what you're doing, you do not need to take 4000 pictures to get one good one. And even if a toddler is moving at 60 miles an hour the entire time, pictures look fantastic regardless.

(Note: I have included way more pictures than I intended. I just loved every one of them and couldn't decide what to leave out.) Jenny even managed to capture a few moments that I don't remember happening. Moments that would suggest we have much more control over our child than we actually do. Moments that might qualify as (GASP!) an actual FAMILY PHOTO! That Jenny Sherouse. She did AWESOME. If anybody is in the NY area and wants family photos taken, I cannot recommend her highly enough.

The only problem is, I'm in love with so many shots, I'm not sure which I should use for holiday cards, photos for the grandparents, one of those photo canvases, the ever important photo on Mazzy's classroom wall, etc.

So. What do you think? Which is the best "family photo" and which is your favorite otherwise? (I promise not to be offended if your favorite photo does not include me.)

Jenny Sherouse gave me a complimentary family photo session in exchange for this post. Thank god I absolutely adore the photos, otherwise I have no idea what would have happened!

Home Video is Boring, Even Mine All the Cool Kids are Rocking Animal Faces on Instagram

65 responses to “Is There a Toddler Wrangler At This Shoot?” 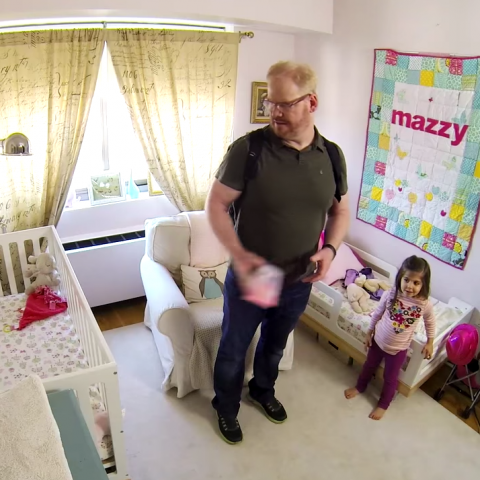