13 Books to Read to Your Kids about Rule Breaking, Trailblazing Women Happy International Women’s Day! And… Happy Women’s History Month! Yep, we get a whole month to talk about all the amazing, rule breaking, badass women in history! If you think a month is too short (because obviously), you can talk about them and read books to your children about them all year long.

Probably the most frequent question I get from my readers (besides where I store all our toys in our NYC apartment) is how I am raising Mazzy and Harlow to be such strong, fearless girls. Really, the one thing I can point to is the books we read at home. We started with “Goodnight Stories for Rebel Girls” a few years ago (you can read my complete review about that series here) and our collection of stories featuring powerful female role models has only grown from there. These books continue to shape how my kids think about themselves and the world, both to see the obstacles in their way and potential paths to success.

The books listed below are far from all the books out there about amazing women (there are a lot of us to cover!), but these happen to be the ones that line our bookshelves at home, the ones my kids ask to read over and over, and as a result have had the greatest impact on my girls. By Debbie Levy and illustrated by Elizabeth Baudeley

Ruth Bader Ginsburg grew up in a time when girls were taught to be wives and mothers, as opposed to doctors and lawyers. “I Dissent” begins when Ruth is a little girl finding reasons to “protest” (when her teacher wanted her to use her right hand instead of her left) and “object” (when she told she had to take home economics instead of shop class) even when she was a child. The story then takes the reader through her college years, her decision to get married, her law career, her entry into the U.S. Supreme Court, and her work as an associate justice, all while using bold typography to highlight words such as protest, object, dissent, disagree, and agree, showing that standing up for inequality, even when it was unpopular, is what helped RBG make her mark. I also like to tell Mazzy and Harlow that Ruth Bader Ginsburg is a Jewish girl from New York City, just like them. Each book in this series focuses on a particular character trait that made that role model heroic. For example, Rosa Parks dared to stand up for herself and other African Americans by staying seated, and as a result she helped end public bus segregation and launch the country’s Civil Rights Movement. This series is told in part comic book format and from a child’s perspective that helps kids process big concepts and injustices.

3) You Forgot Your Skirt, Amelia Bloomer By Shana Corey and illustrated by Chelsey McLaren

Amazon // Not available on Bookshop

Amelia Bloomer wasn’t the first woman to wear pants, but she was the first person to write about her experience wearing them in a women’s newspaper that she ran. Her article inspired many women to inquire about where they could get a pair for themselves, which is why the new style became known as “bloomers.” “You Forgot Your Skirt, Amelia Bloomer” tells the story about what women used to wear (huge uncomfortable skirts with underwire that swept the floor, preventing them from doing fun things like running and jumping), how Amelia learned about this new style of dress and how she popularized it around the country and then got criticized for it. It shows that doing something relatively small (wearing a clothing item and writing about it) can end up making a huge impact; one that has changed how women dress and are perceived to this day.

4) I am Hellen Keller When Helen Keller was very young, she got a rare disease that made her deaf and blind. Suddenly, she couldn’t see or hear at all, and it was hard for her to communicate with anyone. But when she was six years old, she met someone who change her life forever: her teacher, Annie Sullivan. With Miss Sullivan’s help, Helen learned how to speak sign language and read Braille. Armed with the ability to express herself, Helen grew up to be come a social activist, leading the fight for people with disabilities and so many other causes.

5) Mae Among the Stars Little Mae’s curiosity, intelligence, and determination, matched with her parents’ encouraging words, paved the way for her incredible success at NASA as the first African American woman to travel in space. This book will inspire other young girls to reach for the stars, to aspire for the impossible, and to persist with childlike imagination. Jackie Kennedy was an American icon of style and grace–but there was steel under that style. Her poise under fire, intelligence, and tireless work as First Lady earned her the respect of leaders worldwide and made her beloved by generations.

7) Elizabeth Started All the Trouble Elizabeth Cady Stanton called on women across the nation to stand together and demand to be treated as equal to men-and that included the right to vote. It took nearly seventy-five years and generations of women fighting for their rights through words, through action, and through pure determination for things to slowly begin to change. By Elena Favilli and Francesca Cavallo

“Good Night Stories for Rebel Girls” is a thick hardcover book with the stories of 100 different women in history who have made a difference by defying the rules. In addition to introducing my girls to a lot of badass women (some historical and some living), the book has also brought up tons of different discussions, starting with the most obvious one— that historically women did not have the same rights as men, and that there is still a lot of work to be done. It’s also guided us into conversations on things like race, arranged marriages, religious differences, cultural differences, war, diseases and dictatorships. The stories are told in a palatable way for kids, but be prepared to elaborate on your own, depending on your child’s age and curiosity. One particularly tough read was the story of Irena Sendlerowa, who saved 2500 Jewish children during the Holocaust. We bought the original book a few years ago and then bought the follow-up book when it was released too.

9) Moses: When Harriet Tubman Led Her People to Freedom In lyrical text, Carole Boston Weatherford describes Tubman’s spiritual journey as she hears the voice of God guiding her north to freedom on that very first trip to escape the brutal practice of forced servitude. Tubman would make nineteen subsequent trips back south, never being caught, but none as profound as this first one. Courageous, compassionate, and deeply religious, Harriet Tubman, with her bravery and relentless pursuit of freedom, is a testament to the resilience of the human spirit. This engaging biography series focuses on the traits that made our heroes great–the traits that kids can aspire to in order to live heroically themselves. Each book tells the story of an icon in a lively, conversational way that works well for the youngest nonfiction readers. At the back are an excellent timeline and photos. This volume features Anne Frank, whose courage and hope during a time of terror are still an inspiration for people around the world today. While Anne and her family hid in an attic during the Holocaust, she kept a journal about all her hopes and fears and observations. That journal and the story of her life are still read and told today to remember the life of a young girl and warn against the consequences of bigotry.

11) She Persisted: 13 American Women Who Change the World She Persisted was written by Chelsea Clinton, which provided a very interesting starting point for my girls. They are both well aware of Hillary Clinton’s historical run for President and I think it’s been helpful for them to see that life continues for the Clintons despite the loss. The book presents important American women throughout history in language that is much more child-like and simple for little kids. Like the precursor for Good Night Stories for Rebel Girls. I also love how each woman featured is illustrated as both a young girl and as an adult. The book tells both what that little girl went on to accomplish and explains they obstacle that she had to overcome to get there.

12) The Story of Ruby Bridges This book tells the true story of six-year-old Ruby Bridges, whose family moved from Mississippi to New Orleans in search of a better life in the year 1960. When a judge orders Ruby to attend first grade at William Frantz Elementary, an all-white school, Ruby must face angry mobs of parents who refuse to send their children to school with her. The book shows with great clarity the courage and strength that Ruby must have possessed just to go to school each day. It also shows allyship in the white teacher who taught her, even when she was the only one in the class. This book features 18 trailblazing black women in American history— heroes, role models, and everyday women whose actions and beliefs contributed to making the world better for generations of girls and women to come. By Linda Glaser and illustrated by Claire A. Nivola

“Emma’s Poem” is about Emma Lazarus, the Jewish woman who wrote the famous poem that is inscribed onto the pedestal of the Statue of Liberty. Emma was dedicated to helping impoverished refugees, back in a time when it was considered improper to “mingle with poor people,” which was the inspiration for her poem. Her now familiar words—“Give me your tired, your poor”—transformed the statue from its original intent, as a gift of friendship from France, into a symbol of hope for immigrants, especially since the Statue of Liberty was many refugees’ first glimpse of America when they came Ellis Island by boat from Europe after the Holocaust. My mother was on one such boat and as a caveat, she bought this book for our girls and couldn’t finish reading it because it brought her to tears.

What are your favorite books about important women in history? The 12 Stages of Tearing Tinkerbell from her Plastic Packaging 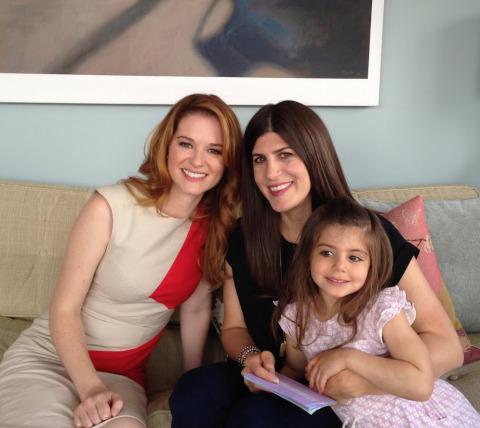